I was hesitant to make the two hour drive from Oakland to Sacramento on a late night after working a full day of campaigning. But when I stepped into Sol Collective in Sacramento and was embraced by a sea of brown faces, mainly Sikh kids from the local UC Davis campus, I knew I was stepping into something special and it was well worth the drive. Mandeep Sethi had put this show on, pulling together a gully line up of South Asian hip hop heads from Los Angeles based Hoodini, to Oakland based Ras Ceylon, to Toronto based Humble the Poet to Bay based Mandeep Sethi himself.

The highlight of the evening was by far when Humble the Poet, Ras Ceylon and Mandeep Sethi took the stage together to spit a song that they had just created that week with a beat produced by Sikh Knowledge. You can peep my live recording of the song Gutter right here, but Ras Ceylon just tweeted at me that the official music video was up. Live and direct, here you go – Gutter.

I’ve written about Humble the Poet and Mandeep Sethi in the past, but who is Ras Ceylon? I connected with him through Sri Lankan friends and when I moved to Oakland a couple months ago, I knew I had to connect. From L.A. to the Bay, Ras Ceylon has been a hip-hop reggae artist representing Oakland for the past ten years. I sat down with Ras Ceylon for a quick Q&A before he headed out to Jamaica on tour. It was a windy day by Lake Merritt in Oakland, so I had to edit the clip just a bit because of the sound – I transcribed some of it though which you can read after the jump.

Taz: Who are you?

T: Why do you make music?

RC: I make music with liberation in mind. So that basically means freedom, you know- mentally, spiritually, politically. Hip hop is a tool and a voice to the oppressed people across the globe, for the past 20 odd years. I grew up with hip hop as a culture. I make hip hop music to smash against the oppression, in any form you find it.

RC: It’s a trip to me though. Coming up with hip hop culture, almost moreso than Sri Lankan being a culture because my mother was always working, so I didn’t really have a whole lot of exposure to my own Sri Lankan and Sinhalese culture. Besides the food, which I love. So hip hop has been a main source of identification and a way to express ourselves. That’s why I like linking with cats like Mandeep. I’ve recently seen other South Asians that are into hip-hop. Growing up I was the only one, the token brown guy in the crowd. It’s a beautiful thing.

T: What was it like to do the show in Sacramento?

RC: That was off the hook. I told the crowd when I was on stage that 10-15 years ago coming into the hip-hop community I never would have thought that we could have a whole entire event with all hip-hop and all South Asian cats on stage rocking. And rocking with skills too. It was really inspirational and it was a great thing to see this new generation is taking it seriously too. And not just taking it for the mainstream aspects of rap music that gets pushed to us by Clear Channel, BET, MTV, and shows materialism and false gangsterism. These cats were actually kicking stuff with a conscious message and to me that’s why hip-hop was created.

T: When did you fall in love with hip-hop?

RC: I remember the day clearly. It was the third grade and 1989 in Southern California. I was chilling and all of a sudden I heard this music coming out of my homies brother’s room. His brother was playing this music and I was tripping. I asked my friend, “What is that?” It turns out it was Public Enemy, “It Takes a Nation of Million to Hold It’s Back.” From that time when I first heard Public Enemy, that really was for me a life-changing experience. I even said it in a rhyme, “…Chuck D. has struck me to think politically.” The first time I heard Public Enemy it really connected with me that you could put a message in the music. For me, that was huge.

T: How does your Sri Lankan background influence your music?

RC: The number one thing was I wanted to make sure early on that when I first started to get serious about making music, that I chose the title “Ceylon”. I took that as my handle primarily so that I would never forget the fact that I am Sri Lankan. Aside from that, just being conscious of the fact that I’m from a war torn area that was created through colonial conditions, and seeing the way things are in the world right now, these are all post colonial struggles that we are having.

T: Can you talk more about “decolonizing the mind state”, a theme that keeps appearing in your lyrics?

RC: It’s all about knowledge of oneself. Decolonization is all about knowing who you really are. It’d be easy for me to say, “I was born and raised in Southern California so I’m a Californian.” But to be real about it, I’m going to have to take it back. My roots come from Sri Lanka. Before they were in Sri Lanka, my ancestors were Dravidian and they came from Ethiopia. Knowing your history is the key.

I feel blessed knowing that conscious Desi hip hop heads like Mandeep and Ras exist, and that they live close enough now that I can build with them on both justice and music. Being a brown Desi teen in America would have been a different experience had I had lyrics and music like theirs to listen to. A rarified pairing, they both have bright futures ahead of them and I’m looking forward to seeing where their intersecting musical paths will take them.

Grab Ras Ceylon’s Scientific Non-Fiction now on iTunes and stay tuned at his myspace to get word on when the Gideon Force collection drops. You can also follow Mandeep Sethi on myspace or bandcamp. And of course, tweet at them both at @RasCeylon and @MandeepSethi. 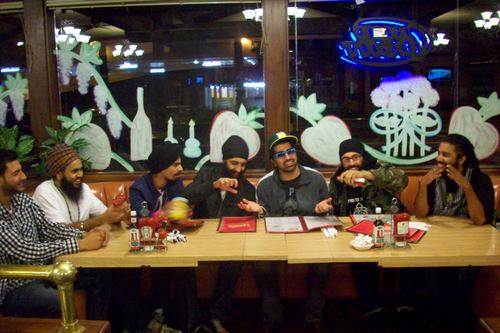