Personally I think an epic Bollywood love story centered around kabbadi would have made for a better movie than one about Cricket. 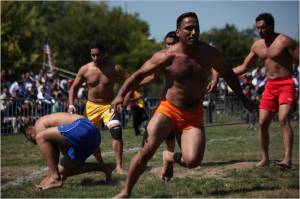 In a recession, are brown men in modest shorts in?

The crowd seemed subdued — at least compared with fans of American sports — and there was little shouting or cheering. Typically, many devotees are Sikhs, and the crowd on Sunday included many men with beards and traditional turbans. Women sat in separate bleachers, many under umbrellas as shields against the sunny heat.

Yet in keeping with the sport’s international appeal, Sunday’s competitors also included a London team of white blond women and an Australian crew with two African-American men from California, one of whom described himself as a mercenary of sorts. [NYTimes] 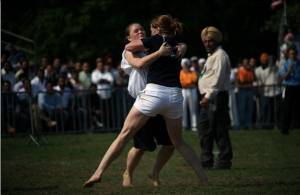