Nikki Haley’s victory Tuesday in the Republican primary battle for the South Carolina Governor’s mansion is symbolic of the huge strides that South Asian Americans have made in the past six years. I say this completely agnostic as to what kind of person or leader she will be or which policies she supports. You don’t have to support her politics one bit to pause and appreciate the demographic and historical significance of Tuesday’s victory. 2010 is a year in which a “raghead” is a few months away from being elected the chief executive of South Carolina. Something has fundamentally shifted. In 2004 when I wrote about Nikki on SM I did so in a post which cited Dalip Singh Saund in the title. He was the lone anomaly in Indian-American history. 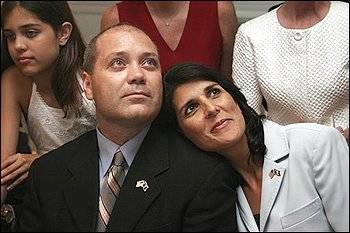 So like, what’s up with South Carolina? Not widely recognized (at least by this blogger) as being a bastion of minority politics, all of a sudden South Carolina is the place to be if you are South Asian and have your eyes on the prize. Earlier this year, you may recall that Nikki Randhawa-Haley, 32, won the Republican Primary in South Carolina?s House District 87 and was to run unopposed in the November election. [SM]

Today Saund is no longer an anomaly but a harbinger:

The Republican Party stepped away from its long and uncomfortable history of racial and ethnic politics in South Carolina on Tuesday, nominating an Indian American woman for governor and an African American man for the House…

p>Nikki Haley, the daughter of Indian immigrants, overwhelmingly captured the GOP gubernatorial nomination over Rep. J. Gresham Barrett — despite a whisper campaign insinuating that she is not really a Christian, as she says she is. And in the 1st Congressional District, Tim Scott, a black state lawmaker from Charleston, convincingly defeated Charleston County Council member Paul Thurmond, a son of the late senator Strom Thurmond (R-S.C.). Barrett and Thurmond are white. [WaPo]

p>A commentator in the Baltimore Sun was exultant this afternoon. He even invoked spelling bees, ivy league schools, and Kal Penn:

… the next decade is set to be the Indian-American decade. Second generation Indian-Americans are building on their parents’ success and achieving in diverse fields. From Ms. Haley’s political success (she is the likely Republican nominee for governor of South Carolina) to prime-time TV, its hard to miss the rise of Indian-Americans.

As late as the 1990s, there was only one notable Indian-American character on TV, a cartoon character, Apu on “The Simpsons.” From the lovable, Slurpee-peddling Apu, we now have an Indian-American on a major TV show each night of the week. From Mindy Kaling on “The Office” to Naveen Andrews on “Lost” to Aziz Ansari on “Parks and Recreation” to Kunal Nayyar on “Big Bang Theory,” Indian-Americans are suddenly everywhere.Indian-Americans don’t just win elections; they win national spelling bees, including 9 of the last 25. Indian-Americans have also taken home three Nobel Prizes. At any Ivy League school, more than 5 of the population is Indian-American, quadruple the share of the national population. [BaltSun]

And this on the heels of Nina Shen Rastogi article in Slate in which she writes about a tipping point of another kind:

Here’s a little secret about me: I like to count Indians. Ever since I was little, I’ve kept a running tally of the South Asian people I’ve seen on American television or in the movies. In the ’80s and ’90s, the pickings were slim. I remember being deeply disappointed to learn that Fisher Stevens was not, in fact, Indian, despite the fact that his head-wagging, malaprop-laden turn in Short Circuit was a blitzkrieg of cringe-inducing clichés. But did you know that the pretty bald woman in Star Trek: The Motion Picture was born in Mumbai?…

According to my count, primetime TV now has about a dozen South Asians in regular or recurring roles–and that’s after the loss of Kal Penn on House, Parminder Nagra on ER, Naveen Andrews on Lost, and Sendhil Ramamurthy on Heroes. Meanwhile, a handful of new South Asian faces are waiting to make their debut next fall, and NBC is about to out-Indian everyone with its new sitcom Outsourced, based on a low-budget 2006 film about an American novelty company whose call center gets relocated to India. Why are there so many Indians on TV all of a sudden?

p>In part, it’s a simple matter of demographics. Immigration from the subcontinent didn’t begin in earnest until the late 1960s. So it’s only now that U.S.-born Indians–who make up about half of the current crop of South Asian performers–are starting to gain a critical mass both in front of and behind the camera. [Slate]

p>But back to Haley for a second. Don’t anyone forget the huge importance that South Carolina has in Presidential primaries. You can decide to skip Iowa, you can get crushed in New Hampshire, but if you win in SC you have life. Every single Republican candidate will want to be Haley’s best friend now. I doubt Palin will run in 2012, but she endorsed Haley. Mitt Romney will run without a doubt, and he has donated a small fortune (~$42,000) to her already. This means that Haley’s place on the national stage is secured in a way that even Jindal’s isn’t.

p>And what about the religion question that SM readers are so focused on? I was happy to hear that NPR touched on her Sikh roots on Morning Edition Tuesday:

Haley does still occasionally attend Sikh services. The Rev. Ray Popham, in the small town of Aiken, says he gets questions about that from his congregation.

Noting that Sikhs and Christians have their own ideas and paths, Popham says, “Religiously-wise, you can’t be both — and it sounds like someone is trying to be political if they’re trying to be both.” [Link]

p>CNN’s Belief blog took the time to give its readers a little primer on Sikhism. Regardless of whether Haley is Christian or not, this potential new post of hers could provide an opportunity for Sikhs to educate Americans and fight general ignorance about Sikhism, especially post 2001.

A lot has changed in six years since I first started writing about politics at Sepia Mutiny. Most of you know that I gravitate to the left of center. I am not asking you to jump for joy and be blind to her politics just because Haley is Indian American. I am not asking you whether she is real or fake as has been debated ad nauseum on some comment threads. I am asking some of you old timers, the Gen-Xers, to take a breath and see how far things have come. When we were kids our parents forced us to be doctors or engineers. When I have a kid I am going to force him/her to be a governor.