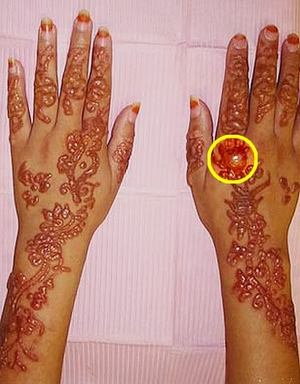 What’s a Jersey Desi girl to do without her “henna tattoo”? The New Jersey Legislature today passed a bill, A940, which would prohibits application of certain temporary tattoos. (h/t inothernews). I was surprised that all hell didn’t break loose from the Jersey Desi Bridezilla population who had to rework the activity on their Mehndi night. Then I read the legislation.

[U]nlike traditional henna which is made from an organic, plant substance, certain temporary tattoos contain additives, in some cases, PPD which can unknowingly cause permanent health concerns and scarring. Long term effects include severe dermatitis, eye irritation and tearing, asthma, gastritis, renal failure, vertigo, tremors, convulsions and coma in humans…PPD is not approved for direct application to the skin. [njleg]

Phew! Y’all can relax.The ban is only on the black henna w/ PPD, not the traditional organic mehndi made from smashing up henna leaves. Though the South Asian subcontinent henna leaves all leave a deep red dying of the skin, the traditional black henna comes from Africa and the Middle East. It turns out black henna isn’t even derived from the same plant as regular henna is.

“Black Henna” is a misnomer arising from imports of plant-based hair dyes into the West in the late 19th century. Partly fermented, dried indigo was called “black henna” because it could be used in combination with henna to dye hair black. This gave rise to the belief that there was such a thing as “black henna” which could dye skin black. Indigo will not dye skin black.[wiki]

The lesson here, Mutiny? Don’t use henna/mehndi unless it is pure and natural, the kind from the motherland. And never get yourself tattooed at one of those beach side tattoo places. Desi, please. Everything-is-Indian Uncle now has another story to add to his list.