Back in September, Taz planned a Boston meetup that attracted dozens of Sepia supporters. It was the first meetup Ravi and I attended on behalf of the Mutiny and we were humbled by the warm reception Boston’s mutineers gave us. That night, we met a lot of people, including BROWNSTAR REVOLUTION, a spoken-word duo composed of Pushkar Sharma and Sathya Sridharan, who Taz later interviewed for a post. Now, more than six months later, BROWNSTAR needs our help. The duo is in the middle of planning UNIFICATION 2010, a joint celebration of Pakistani and Indian independence in New York City and you’re invited. 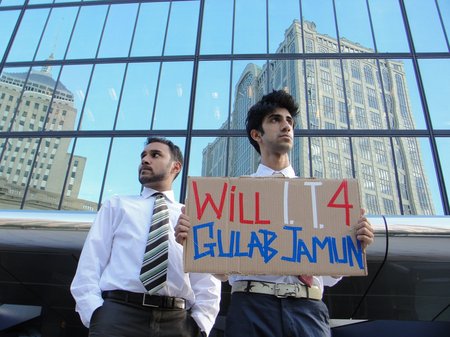 Why: Pushkar says “In an effort to counter the hatred that was stoked during the Mumbai massacre we created UNIFICATION. We wanted to create a symbolically powerful event for people to rally and demonstrate for unity and peace. Another motivation for me was the fact that our family is Punjabi, from Lahore, and at Partition shifted to Amritsar. Like many of us living across Partition whether in Punjab or Bengal or Kashmir or wherever, being divided across these arbitrary ‘national’ borders had always confused me. It always seemed politically wrong to say that I was Pakistani, but also so short-sighted to say that I was simply Indian. The purpose of UNIFICATION was to create a space where these divisions were disarmed. Where no matter where we were ‘from’ we were all sisters and brothers, grieving and celebrating and honoring our common past and future together.”

BROWNSTAR is still looking for a) interns who can help with planning for the event, b) committed community partners to volunteer to be a part of the Steering/Host committees for UNIFICATION 2010, c) acts who may be interested in performing at the event, d) YOU to spread word of the event to your friends. For more information, please email Pushkar at NORTH.STAR@BROWNSTARREVOLUTION.COM. Hope to see you all there!

6 thoughts on “Mark Your Calendars for UNIFICATION 2010”