[Update: See below the fold for much more extensive coverage of what Knotts actually said. It's far more offensive and inflamatory than the first reports revealed] 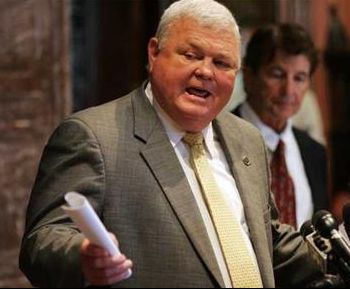 I’d love to show you the video of this clip, but it was either pulled from the archive or “Republican political operative and show co-host Wesley Donehue …forgot to hit record” [link].

After being soundly reamed by Haley for his remarks and more mildly criticized by the SC GOP, Senator Knotts “apologized” saying

my “raghead” comments about Obama and Haley were intended in jest. Bear in mind that this is a freewheeling, anything-goes Internet radio show that is broadcast from a pub. It’s like local political version of Saturday Night Live, which is actually where the joke came from,” Knotts said. “Since my intended humorous context was lost in translation, I apologize. I still believe Ms. Haley is pretending to be someone she is not, much as Obama did, but I apologize to both for an unintended slur [link]

And here we come to the crux of the matter. Both Obama and Haley, US Citizens and Christian by their own accounting, are frauds. They’re not “one of us” because they’re not white.

The Senator hasn’t tied himself up in Knotts trying to explain himself, he has revealed exactly what he means. Sadly for him, the race card wont work this time, not because there are no bigoted primary voters, but because Haley looks white and has Sarah Palin’s endorsement. At the same time, this isn’t going to hurt him one bit. It’s not a macaca moment (another ‘unintended slur’), it’s just politics as usual in South Carolina.

UPDATE: Some audio has surfaced, this is some of what he said, although I have rearranged and selected material from the original source

“She’s a f#!king raghead… ” Knotts said… “She’s a raghead that’s ashamed of her religion trying to hid it behind being Methodist for political reasons.”

“We need a good Christian to be our governor,” he said. “She’s hiding her religion. She ought to be proud of it. I’m proud of my god.”

Knotts says he believed Haley has been set up by a network of Sikhs and was programmed to run for governor of South Carolina by outside influences in foreign countries. He claims she is hiding her religion and he wants the voters to know about it.

Knotts says he believes Haley’s father has been sending letters to India saying that Haley is the first Sikh running for high office in America. He says her father walks around Lexington wearing a turban.

“We’re at war over there,” Knotts said. Asked to clarify, he said he did not mean the United States was at war with India, but was at war with “foreign countries.” [link]

p>I challenge you to read this and say that the GOP dismissal was not mild.