I was the biggest Badmash comicstrip fangirl. Biggest. So it was with giddy excitement that I opened up my e-mail announcing a new Desi comicstrip hitting the interwebs by Badmash boy Sandeep Sood. ACK! (“Amar Chitra Katha”) is a “comic that places two bit characters from the Mahabharata into modern-day Jersey.” With a plot line like that, how can you not be just a wee bit curious? 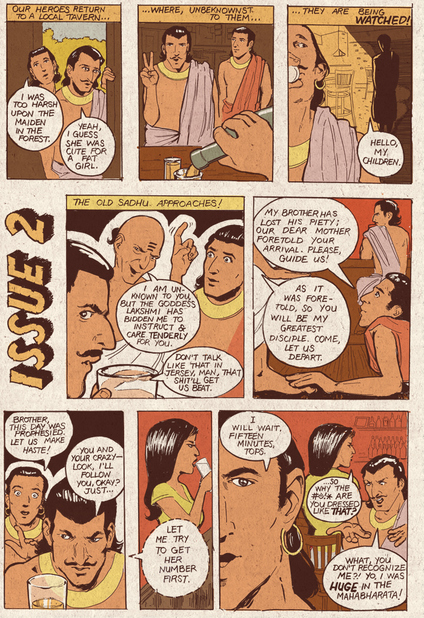 See Issue 1 to Ack! right here. The comic strip is only two weeks in, so who really knows where the story can go from here. At this rate, just about anywhere. Who woulda thunk of Jersey-fiying the Mahabharata? What was Sandeep thinking?

I first learned about Hinduism through comic books…So, like a good, inclusive Hindu, I allowed these stories to merge with the other epics I followed on Saturday mornings and then recreated during the week. > Rama and He-man would partner to retake the Castle Greyskull. Hanuman would respond to the Thundercat signal, and Optimus Prime would rescue Sita from Ravana’s castle just before Luke Skywalker’s X-Wing blew it to smithereens. And the princesses! The princesses were hot as shit.[ack]

Interesting. I was more of a Strawberry Shortcake, Care Bears, and Rainbow Brite type of a cartoon watcher. That fusion would have looked far more different had it been my kind of fusion. And of course, my religion doesn’t really mesh well with cartoons. Keep an eye on Ack! – with Sandeep at the helm, Ack! has the potential to be pretty awesome, almost as awesome as Savita Bhabi. What do you think? Is this new comic strip a hit or miss?