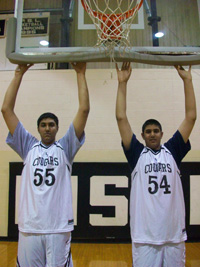 If you love basketball and hope to see a desi player in the NBA, you might want to pay attention to the twin towers of Western Pennsylvania, also known as Sim and Tanveer Bhullar. Sim, 17, is 7-foot-4. His brother, 15, is the short one: only 7-foot-2.

The Indo-Canadian brothers, who play for Kiski School in Saltsburg, Pa., are not just tall, but also talented.

Sim, who just completed his sophomore season, averaged about 16 points, 14 rebounds and eight blocks. He has three-point range and is a strong passer, but he also can run the floor and finish strong with power dunks.

Tanveer averaged about 12 points, 11 rebounds and five blocks during his freshman season. He possesses a smooth 15- to 17-foot jumper and has quick feet and soft hands, key attributes to low-post success.

They both have improved immensely at Kiski School under Freedman, a longtime college and NBA assistant who arrived at the school about a month before the Bhullars did. They have since remade their bodies, regularly working out at 5 a.m. with the Kiski wrestling coach. [Link]

Working out at 5 a.m.? These guys are serious about their basketball. Sim already has a scholarship offer from West Virginia and Duke may come calling soon. The brothers are likely to be solid college players, but will they someday be dunking over LeBron James?

The NBA had players from 36 countries and territories this season, but none from India.

The brothers already have a following. When they visited the Golden Temple, a Sikh spiritual and cultural center, last summer, about 100 people crowded them.

“If I was able to make the NBA,” Sim said, “that would be something big for India.” [Link]

I can just picture the TV announcer: “Let’s take a break from cricket news to bring you a report from the NBA. Sim Bhullar scored 12 points and had 15 rebounds last night, while Tanveer scored 16 points and had 6 rebounds. Back to cricket news … Sachin Tendulkar had dal makhani for lunch today. No word yet on what he plans to have for supper.”

17 thoughts on “Are you ready for some BBB (Bhullar brothers basketball)?”