The Houston bureau of Sepia Mutiny (our southernmost outpost) has shuttered its doors, a casualty of the economic upheaval. The Houston bureau chief (me) has returned to Los Angeles to rejoin our offices there. One of the things I will miss most about Houston in my yoga teacher/class. A good yoga place is hard to find (even in the “yoga capital” of the U.S.). And isn’t it wonderful how so many of you nodded your heads in agreement just now. For many of us, finding the right yoga class is as important, and as difficult, as finding the right doctor. On the airplane to Los Angeles last night I read a blurb in a magazine that made me aware that many of us owe a debt of gratitude to one Pierre Arnold Bernard (a.k.a. The Great Oom). He had a significant hand in ensuring that Yoga is now essentially a part of everyday American culture: 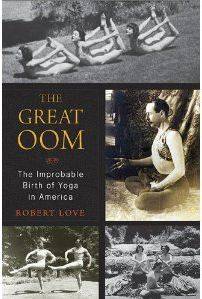 … men and women came to his ashram on the Hudson River, two hundred acres of leafy real estate in Nyack, New York, that included a zoo, a yacht, airplanes and a dozen mansions that Mitchell could only describe as the “English countryside estates one sees in the moving pictures.” Bernard had made his fortune teaching yoga, and his students made up a Who’s Who of American life: college presidents, medical doctors, ministers, a spy or two, theologians, heiresses, a future congresswoman, famed authors and composers — some of the wealthiest and most influential people in the world. Doctor Bernard, they called him, and like a benevolent physician he ministered to their needs, body and soul. He sheltered them, entertained them and gathered them together to teach them the art of living. They stood on their heads for him, worked in his fields, sang in his theatrical productions and performed in elaborate, professional-level circuses for his approval. Some of them came to delve deeply into hatha yoga and the philosophy behind it, some for romance and fresh air, some for the Bernard cure, having been abandoned by hospitals and mental institutions. These he literally led back from ruination — from ledges of despair, lethal addictions and Great War nightmares. How he managed to do this has remained his closely guarded secret…

But who was he, really, this uneducated savant who could lecture extemporaneously for three hours on the similarities between the philosophies of ancient India and the Gnostic heresies of the early Christians? This same man was known to stage a three-ring circus, manage a semi-pro baseball team, train a world-class heavyweight boxer, repair a Stanley Steamer automobile and whoop it up on fight nights at Madison Square Garden with nicotine-stained reporters. This last was where he was most at home, some said, shouting, swearing, happily chomping on a cigar. Who was this man of such wild contradictions, a name as familiar to headline writers of the 1920s as Charles Lindbergh? The answer depended to a large degree on who was doing the asking. [NYT]

p>The following, mentioned in a WSJ review of the book, won’t surprise many of you. The fear of the unknown always causes hysteria:

“yoga was labeled a criminal fraud and an abomination against the purity of American women. It was associated with sexual promiscuity and kicked to the fringes of society.” [WSJ]

p>I find what I have read about Bernard thus far to remind me a great deal of F. Scott Fitzgerald’s title character in The Great Gatsby. In an essay from 1965 a writer describes Bernard with the same awed fascination as found above:

A year after the first World War, a middle-aged male calling himself Dr. Pierre Arnold Bernard–who also was known as the Omnipotent Oom–suddenly appeared in the village of Nyack, 15 miles up the Hudson River from New York City, and bought the show place of the area. This was an estate more than a century old, and Oom got it cheap, reputedly for $100,000…

The realtor with whom Oom dealt obtained no information concerning what sort of doctor he was or where he came from. In fact, Oom frightened him, although not intentionally. It was just the way Oom happened to look. He was heavily muscled, had a large head covered with close cropped hair, and his grayish-green eyes were so sharp; that they seemed to fix whatever fell within their point of focus, the way the pin of a collector fixes a butterfly. [Link]

The book, The Great Oom: The Improbable Birth of Yoga in America, is being released on Thursday. Let us know if you pick up a copy and what you think after you’ve read it.