These two guys are officers in the U.S. Army: 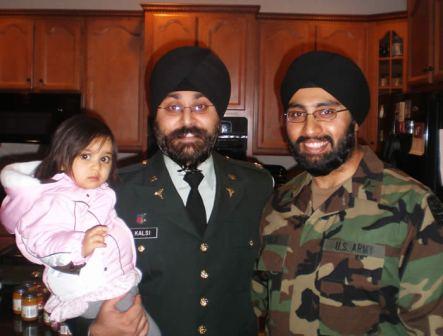 In USA Today: Dentist Tejdeep Singh Rattan (right) is the first turbaned Sikh to graduate from U.S. officer basic training since 1984. (He is pictured with Kamaldeep Kalsi, who is doing basic training this summer.)

We heard about them last year, when they were first granted the exemption. (The Langar Hall had a post on the subject here.)

As I understand it, this is not a permanent policy change — in the future, observant Sikhs joining the U.S. military will again need to apply for a special exemption to uniform requirements to be allowed to serve while wearing a turban and unshorn beard. The fact that both Kalsi and Rattan have medical training makes me think that things might be different for someone applying for the same waiver at the ground level. That said, this still seems like a significant shift on a symbolic level, and I would fully expect there to be at least some controversy about it.

Predictably, some of the reactions I’m seeing online to this change are not exactly positive. The following comment on the story at USA Today is pretty typical:

This is an utter disgrace to the United States and the United States Army. How on God’s green earth did they allow this? It never ceases to amaze me the stupidity in our governments leadership. A civilian made this call on allowing this “individual” (that’s what he is not a trooper), to graduate.

But another commenter responded to that statement much more supportively:

He’s a Captain in the US Army. I find your disrespect for our military disgusting, ignorant and anti-American.

What kinds of reactions have people been hearing to this news?

(Incidentally, the Amardeep Singh quoted in the USA Today article is not me.)