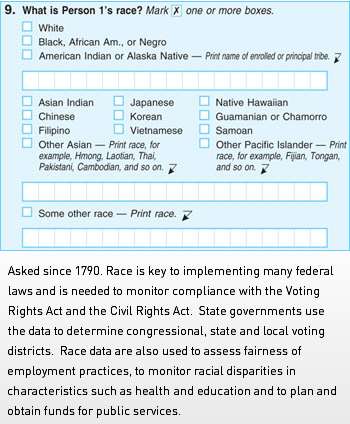 The ‘boxed’ options for race include several different kinds of Asian. “Chinese,” “Vietnamese,” “Korean,” and “Japanese” are fairly predictable Asian nationalities, rightfully listed. The census uses “Asian Indian,” presumably to differentiate from “Native American” or “American Indian,” but interestingly, hints that “Pakistani,” (and by extension, “Bangladeshi” and “Sri Lankan”) would go under “Other Asian.”

Obviously, for Sepia Mutiny, which has always defined itself as an inclusive blog for the “South Asian” diaspora, this divison of the South Asian community is a little frustrating. How am I, whose family all originate from what is now Pakistan, of a different racial background from a Mohajir Pakistani, whose family all originated in what is now India? What does it mean to ask a question concerning “race,” and then lists three definite categories that might be understood as “racial,” only to then list nine further options, most of which are clearly nationalities, not “races”?

This is a discussion post. I am curious whether readers have read any backstory on how the census might have arrived at this rather idiosyncratic way of dividing up the communities from the Indian subcontinent? (The Census has a “Race and Ethnicity Advisory Committee” with an “Asian” sub-group. However, I haven’t been able to find much evidence of discussion over categories at Census.Gov. Most of the committee’s focus, perhaps rightly, seems to have been on making sure everyone has the opportunity to fill out a census form.)

Another discussion-related question: anyone want to speculate on how or whether this division on the census form might matter for the South Asian community down the road?

Finally, for readers from Pakistani, Bangladeshi, or Sri Lankan backgrounds, who have received the census form — are any of you thinking of checking “Asian Indian”? Since the census allows us to fill out more than 1 box under race, is anyone thinking of filling out both “Asian Indian,” and “Other Asian”?

UPDATE: A nice op-ed by Susan Straight on the evolution of Census race categories is here. She doesn’t focus on the “Asian Indian” question in particular, but it’s a good read.