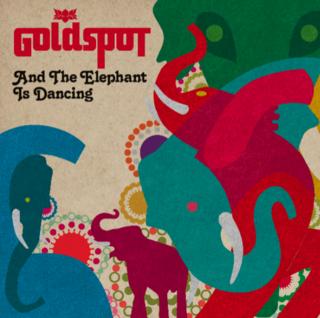 Five years ago, Abhi first brought the Mutiny’s attention to Goldspot, the Los-Angeles-based band founded by multi-talented frontman Siddhartha Khosla. Remember their first album, ‘Tally of the Yes Men?’ This past fall, Goldspot released their second full-length album ‘And the Elephant is Dancing,’ which I’ve been playing in heavy rotation on iTunes for the last few months. Their work, often described as ‘Bollywood-inspired’ and ‘Beatles-influenced,’ is getting even more attention this time around. In the past year, Goldspot has gotten play on television shows such as ‘How I Met Your Mother,’ and soundtracks including ‘Today’s Special,’ starring Aasif Mandvi and the Bollywood release ‘The President is Coming.’ And just recently, Apple featured the instrumentals from their song ‘Clap, Clap’ in the video introducing the iPad (starts at 2:18) and public radio station KCRW, in Santa Monica, California invited them to perform on-air. Want to hear more Goldspot? Listen to them tomorrow on your local NPR station. Khosla and the gang are slated to be featured on ‘Tell Me More’ with host Michel Martin.

If you get the chance, be sure to catch one of their live performances, so you can see first-hand how Khosla brought sexy back to the harmonium. I attended one of their shows in Philadelphia this past November and the band’s energetic show had half the crowd dancing by the stage towards the end of the night. (Philly fun fact: Did you know that Khosla, a Penn alum, at one point wanted to be a lawyer and was the first musical director of acapella group Penn Masala?) Take a listen to ‘And the Elephant is Dancing‘ on iTunes and judge for yourself. My favorite song? ‘One Year Anniversary.’

UPDATED: This just in from Goldspot. “Sorry for the sudden change, but Goldspot’s segment on NPR’s “Tell Me More” has been been pushed back. As it is a news program, other matters (like health care reform) have taken center stage. We will keep you posted as soon as we have an air date.”

14 thoughts on “UPDATED: Listen to Goldspot”