More of a “hot mess” (Thanks, Cicatrix.)

Via the Daily Mail:

She has a legacy of wearing revealing dresses. But it appears at the age of 44, Elizabeth Hurley is still not ready to give up the game.

The actress attended the Love Ball charity fundraiser last night in a dazzling blue sari WITHOUT the cropped top, a Choli or Ravika, which is typically worn underneath it.

Ravika? There’s a word I’ve never heard. According to Wiki, it’s Telugu. The more you know (Ahhhhhhh!). Back to shiz, I mean, Liz:

The mother-of-one left nothing to the imagination in the ensemble, showing she still has the voluptuous figure to carry off even the most risquÃ© of numbers

I think she could have shown that even with the briefest of blouses. But I’m a rude prude. Some have said that she was probably caught unaware, much like Alexandra Kerry was at Cannes. What, you think Kerry knew her girls would show through? I don’t. She would’ve worn different knickers, if THAT were true. But back to Miz Nangi. I agree with the Daily Mail:

As someone used to attending showbiz parties, she would probably have been aware of the revealing glare of the paparazzi flashbulb.

But it was unclear whether the revealing nature of her outfit was a ‘sheer’ accident or intentional.

Liz was accompanied by her Indian textile heir husband Arun Nayar, who she married in 2007.

Adding to the craptacular effect? Those wild raccoon eyes. Sure, there are smoky eyes and then there are cautionary tales about the dangers of shadow and liner, when applied with a spatula. Perhaps I’m being too harsh? Did any of you find her fetching? Or does the collage below the jump (25-50% NSFW) leave you retching? 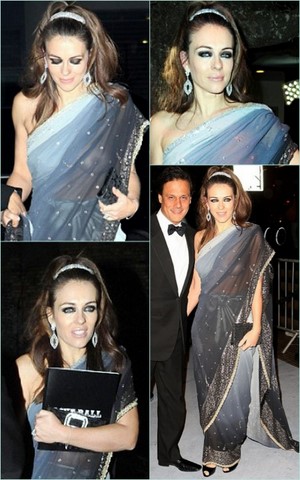 86 thoughts on “What’s Behind That Blouse?”