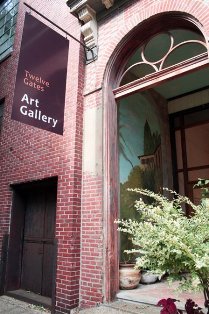 This past summer, in the hopes of finding something of interest to you mutineers, I Googled a random bunch of terms and stumbled upon Twelve Gates Art Gallery, Philadelphia’s first South Asian art gallery. The gallery, which opened in May, features the work of a variety of contemporary South Asian artists. In addition to exhibiting collections, Twelve Gates also hosts film screenings, poetry readings and musical events. (So heads up, Philly mutineers. You are now in ‘the know.’ Thank me later.)

Before hitting up their latest exhibition, I caught up with Aisha Zia Khan, herself a sculptor who owns the gallery together with her partner and husband Atif Sheikh, to ask her about the gallery. Khan moved from Pakistan nine years ago and immediately immersed herself into the art scene. What motivated you folks to start this gallery? What was your prior involvement in the art world?

We have been collecting art for more than ten years now and the idea of an art gallery has been brewing as long. The idea behind Twelve Gates is more of a cultural center for all types of arts like films, music, literature etc. A big driving force behind starting the gallery is that a lot of really cutting-edge art is being done in the area and needs to be highlighted. Those artists need to be given a chance to be shown. Eventually we hope to host residencies here in Philadelphia for international artists.

Where do you see South Asian American art going in the next few years?

South Asian American Art or the art of the diaspora as I call it brings with it some unique cultural experiences (dealing with cross-culturalism and migration) that have been producing marvelous works and in today’s political climate it has been happening pretty rapidly. In the near future, I believe it will be quite distinct from South Asian art. We intend to keep looking for edgy artists among the artists of the diaspora. 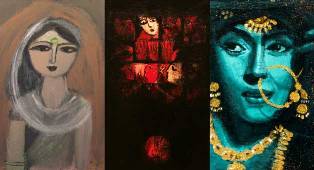 Last night, I finally visited the place for myself to see an exhibition featuring three female artists, including Daisy Rockwell. Yes, she’s the granddaughter of the Rockwell, the famous illustrator and painter known for his memorable scenes of everyday American life. But Daisy’s work is none of your typical Saturday Evening Post covers. This collection showcases portraits – miniature, almost post-card-sized depictions of (primarily) Pakistani icons. Muhammad Ali Jinnah. Benazir Bhutto. My favorite? A grouping of four Benazirs, shown at various periods in her life. In every scene, Benazir’s clothes are painted over with glitter. So how did Ms. All-American Rockwell get into painting desi folks? (Turns out she also contributes to the South Asian blog Chapati Mystery under the name “Lapata“)?

“In art class, Daisy Rockwell disliked owning up to her lineage. She gave up painting and focused instead on studying Hindu literature (after enrolling in a Hindi class on a whim). Eventually, she found herself running the Center for South Asia Studies at Berkeley. Then one day she signed up for an etching class, and the first image she made was of Jinnah. That led to another. And another. Before long she had scores of prints and paintings. “For 15 years I had not been processing any information visually,” she says. “There was a backlog.”‘ [Link.]

If you guys are in the area, it’s definitely worth checking out. The work of Jennifer Narang, Daisy Rockwell, Nahid Raza is on display the rest of January through February 3rd, 2010.