A couple of weeks ago, I tuned in to the Food Network’s The Next Iron Chef to find a sophisticated, soft spoken, skinny desi chef cooking up a storm. His name is Jehangir Mehta and his delicate dishes in every episode and challenge have been distinguished by their creative use of fresh herbs, fruit, and spices and their aesthetic presentation. 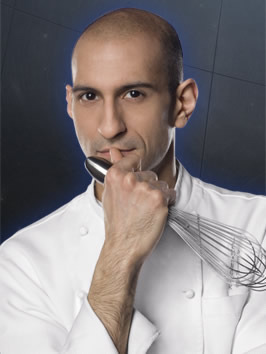 Mehta is the owner and executive chef of Graffiti, a Lower East Side NYC restaurant that serves “international small plates that feature his trademark affinity for bold flavors and spices such as chillies, sambhar, turmeric, and star anise.” In cook off after cook off, Mehta–who trained as a pastry chef at the Culinary Institute of America, but who hails from a Parsi family in Bombay — has been impressing the judges with unusual and original dishes such as pickled ginger scallops, bitter melon fritters, and apple and soy caramel skewers. His preparations are like miniature paintings; each one a carefully choreographed mouthful of flavor.

Tonight at 9 PM EST is the season finale where Mehta will battle against the Philadelphia-based Chef Jose Garces. Two very qualified chefs from two ethnic backgrounds with rich culinary traditions; it’s bound to be a close match.

Below the fold is a brief Q&A with Chef Mehta, including his thoughts about reality TV, his take on a South Asian Thanksgiving, and his recipe for his favorite comfort food.

Will Mehta be the next Iron Chef? We’ll soon find out.Q. You’re from a family of accountants in Bombay, came to the US to attend CIA and have since made your mark as a pastry chef in various highly rated establishments, then opened your own restaurant Graffiti. What is it about cooking that appealed to you in the first place? Who was your first inspiration?
A. The health and medical properties of food always fascinated me as I had grown up that way. When I was young and had a cold, my grandfather made a concoction of one tablespoon of honey, lemon juice and brandy. This was the only medicine I was given. For a sore throat there was tea with ginger and lemongrass. Even when I fell and hurt myself, fresh turmeric was ground and applied as it is an antiseptic and has anti inflammatory properties. It was this that sparked my interest in the culinary field.

Q. Are you surprised you’ve made it this far on The Next Iron Chef?
A. No. I had gone with a positive attitude, but from what I have been told, some of my fellow contestants sure were.

*Q. How does your Indian background influence your approach to cooking? I’d love to hear your thoughts and comparisons about the culinary world in Bombay, your hometown, and New York. *
A. Growing up food at home on a daily basis was simple. A lot of it being Parsi Zorastrian style cooked. Yet my parents would go out of their way to expose my sister and me to different proteins. So I had partridges (now banned), rabbit legs, veal and various offals amongst other food. Also once a week they would take us out to dinner at a fine dining establishment. In college I discovered street food. However after coming to New York I was exposed to even more global cuisines. In New York one can eat out all the time and yet not cover all that the city has to offer.

Q. Your restaurant Graffiti serves an eclectic menu that has hints of Indian and Asian influences. How did you come up with the menu? Have you experienced resistance to your use of spices, herbs, flowers in your food? Or, is America ready for a new kind of food?
A. My style of cooking is personal and ingredient based. At Graffiti we explain each dish while serving mentioning the different tastes it will invoke. I guess the clients who visit Graffiti have done their research and are ones who are interested in experimenting with new flavors. They are very appreciative of the food and the dining experience and for me that is very satisfying.

Q. You have a reputation as a tough cookie, sometimes heartless on the current season of the Next Iron Chef. And yet, in the last episode, you prepared a five course meal which described your personality as “happy.” Does reality TV magnify one’s flaws in surprising ways?
A. That is one big downside of reality TV. Things are edited for drama. Comments are taken out of contest and time lines are exaggerated. However I have no control over this and therefore I just take it in my stride. I am a happy person and everyone who knows me including my guests know that too. That is all that matters.

Q. The dishes you have prepared on Iron Chef have been viewed as risky, excessive, and in the last episode, where you paired fish with flowers, one of your fellow contestants described your display as reminiscent of a funeral procession. Throughout it all, you’ve come across as poised and extremely self-confident, not seeming to care what other people think and doing what you like to do and feel you do best. What is that?
A. That is my philosophy. I want to win on my own strength. I am not affected by what others say or do. Nor will I ever run others down for I see no need to do that. When I am criticized I listen to what is being said and learn to better myself the next time. Yes I do take a lot of risks. Most are calculated risks but I am also ready to face the consequences of my actions. Sometimes when I take a risk I could fall but I also have the strength to get back on my feet.

Q. I enjoyed watching the Indian food cook off on The Next Iron Chef. What was that challenge like for you, given your familiarity with Indian food? More challenging? Frustrating? It seemed as though the judges held you up to a higher standard than the others.
A. Well I cannot speak for the judges. I am definitely familiar with Indian food and love it although I do not cook traditional Indian food. In terms of pressure, it was far less stressful than other challenges but it was also a double elimination and that was a constant threat. Thankfully it all went off well.

Q. You love sweets and desserts. That is obvious from the sweet items you’ve placed on your menus, your repeated use of the ice-cream machine on the show, your culinary experience with Candy Camp and your training as a pastry chef. What is it about desserts and you?
A. I worked as a pastry chef for over ten years. The ice-cream machine in the kitchen stadium was jinxed for me I guess. Unfortunately when sugar is not frozen it tastes even sweeter. Now when guests come into the restaurant they joke about it constantly when I serve ice-cream with the desserts.
* Q. What cooking ingredient have you recently discovered that most excites you?*
A. With nine and a half month old twins in the house, it’s just baby formula!

Q. What is your comfort food?
A. An easy to prepare dish called Thyme Roasted Potatoes. The recipe is here.

Q. The holidays are coming up, and with them, people start thinking about family and food. What are your personal favorite holiday foods? Why?
A. A traditional Zoroastrian dish called Than Dar Patio. Which is yellow lentil, white rice and a thick spicy tomato, onion gravy with shrimp. Its eaten on all auspicious days akin to holiday food here in the US. Other than that I like a traditional Christmas Pudding.

*Q. If you were making a meal for a South Asian Thanksgiving dinner, what would you include? *
A. I would use idli instead of corn bread. Dosas stuffed with potato and turkey.

Q. Pastry chef. Party planner. Cookbook author. Teacher. Reality show contestant. What’s next on your plate?
A. LOL waiting for a call for dancing with the stars!

23 thoughts on “Jehangir Mehta: The Next Iron Chef?”