As promised, here’s the second half of our Guernica/fiction discussion! You can read the first post, about Hasanthika Sirisena, as well as a little background about the Guernica issue here. 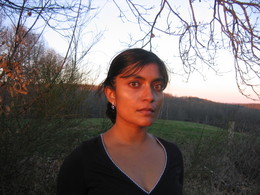 Our second interviewee is Preeta Samarasan, writer (and sometime SM commenter). Her story, “A Rightful Share,” was also in the Guernica issue. It begins,

“I want to tell you about my friend Kandan. Full name Kandan A/L Palanivel. Twenty years old. Handsome bastard. Of course we men don’t stare at each other and think who’s handsome, who’s ugly, of course not. I’m just saying only. If you had seen him, you also would have said the same thing. We all–me and Kandan and one whole group of fellers–used to lepak at one bhaiyyi coffee shop near KL Sentral there, and even the stylish college girls, the ones from rich-rich families, talking with hell of an American slang and all, used to come and sit with us on Saturday afternoons. Giggling, blinking their big eyes at him like he was God. Even if I strip naked also nobody will look at me like that, I tell you. Fooyoh, terror lah that feller, six feet tall, big shoulders, hair like a TV model, and dunno from where he got brown eyes, almost like mat salleh like that. Next to him Hrithik Roshan also will lose. But he was just a simple boy from Rawang, laborer’s son, never gone anywhere. Cannot even speak English properly.” [keep reading A Rightful Share]

I liked the distinctive voice and unreliable narrator of this story, and how deftly Preeta showed me ways around him; I also appreciated the complicated detail of political setting. I joined Sepia Mutiny as a regular contributor after guest blogging during a trip to Malaysia (with Preston Merchant; Malaysia- and Preeta-related links at the bottom of this post), and reading Preeta’s writing after seeing some of the places she has written about also brings me back to my own affection for them.VVG:

Can you tell me a little bit about the genesis of this story, and how you view this particular political moment in Malaysian history?

The Masjid India area of Kuala Lumpur is one of my favourite areas of the city. When I went home in October of 2007, I decided I wanted to set a story there, and I wanted it to take place during the Deepavali season because that’s when Masjid India is at its best. But I didn’t want it to be some exoticist piece of tripe about the smells of spices and the beautiful bright colours of the flowers etc. etc. I was afraid of that, because it seemed that any piece of writing about a vibrant Indian neighbourhood during the Deepavali season could easily devolve into that.

I hesitate to talk about the HINDRAF riots in this way, but I have to admit that they did provide me with the context I’d been searching for for a Masjid India story. I was home again for Deepavali in 2008, one year after the riots, and many people were still talking about them. Within the Indian community, the atmosphere was very charged, and people were saying things like “What to celebrate this year? We’re not celebrating as long as those men [the HINDRAF leaders] are in jail for us.” I laid aside my own reservations about HINDRAF and tried to get into the skin of people for whom these grand gestures–the rally, the delivering of a petition to the British High Commission–had been uniquely empowering. My problem with HINDRAF has always been its narrow, sectarian emphasis. Sure, many Malaysian Indians are Hindu, but a significant minority are not. And that’s only the small, most superficial limitation of their platform. There is a much more fundamental problem: racial politics are how Malaysia got itself into this mess in the first place. One party for the Malays, one for the Chinese, one for the Indians. Separate and not so equal. What the country needs is a political movement that does not talk about ethnic origins, because these should not be relevant. Many Chinese and Indian families have lived on the Malay peninsula for longer than many “Bumiputera” families. The whole system is a farce. The marginalisation of the Indian community is a human rights issue because it is about how a government is treating its own citizens; it should not matter where their ancestors came from, or whom they pray to. Yet every opposition movement to-date has somehow become trapped in the same rhetoric of race and religion, even if what they’re seeking is precisely to narrow the divisions between the communities. We’ve been left with no way to talk about equality in Malaysia without using the language the Barisan Nasional (National Alliance) has given us. Our imaginations, it seems, are constrained by our history. But I guess I have to recognise that this is only one fairly idealistic way of approaching the issue, and that maybe the long-term goal of changing the way Malaysians think about “race” cannot be achieved without the more immediate goal of redressing the country’s social and economic imbalances.

This seems like a common tension in political debates of the left–the push and pull between the practical and the ideal. And in fact, your narrator’s voice seems to be constantly acknowledging that… Even beyond the realm of politics: what he does think about his friend, versus what he should think about his friend. How did you find the voice of that narrator, who I see as simultaneously practical and romantic? You’ve written about sex and expectations in interesting ways, both here and in your novel. This character reminded me a little bit of the father in Evening–acknowledging what is proper, wanting something else…

I felt that this story ought to be told by a young man, somehow–not that Indian women in Malaysia don’t face their own challenges, but perhaps I was preoccupied with the difficulties of young Indian Malaysian men at that time, not just because most of the HINDRAF voices I was hearing (in the news and around me) were young and male, but also because of a number of highly publicised cases of police brutality (though I should emphasise that ethnic Indians are not the only victims of police brutality in Malaysia) and because of the many negative stereotypes floating around about young working-class Indian men. (Interestingly, these stereotypes are similar to the ones of young working-class African-American men in the US). The tension between the practical and the ideal is also something that defines my generation and younger generations in Malaysia–that sometimes paralysing question of whether we should concentrate on short-term fixes or on changing the way our countrymen think about race and religion and class.

And the other related tension you mention here–between social convention and desire– is also so much a part of the culture that I didn’t even really think about it when writing the story (or when creating the character of the father in Evening). I think it would be difficult to write a Malaysian character in whom these tensions didn’t surface.

You and I met on book tour, when we read together at Harvard Bookstore. I know we’ve had some similar laments about the way South Asian authors are characterized (indeed, you piped up on the other thread on this topic; thanks very much). (Our mutual friend, Celeste Ng, recently wrote a terrific article on this topic.) I’ve always enjoyed corresponding with you on topics political and literary, and I was wondering what you thought of the issues that Amitava and I raised in our editorial note. What do you think brings South Asian writers together? Theme? History? Why look at us as a group? Why not? And… what are you working on now? Can we hang out on book tour again?

Oh man, this is a tough one! I’ve gained so much from my friendships and exchanges with other writers of South Asian descent that I can’t dismiss the category outright. (You’ll note that I hesitate to refer to myself as a “South Asian writer” because I’ve spent a total of one month in South Asia–Malaysia, where I grew up, is in South East Asia.) I think that the culture and history that most of us share (again, I’m being very careful here: biology is not the same thing as culture, and it is certainly possible to be South Asian by blood and yet not feel culturally South Asian) manifest themselves in certain themes, a particular sense of humour, a particular relationship to language. I don’t think it’s as simple as Amitava’s “verbal exuberance or hushed poetry” (though I suspect he himself is being somewhat facetious). But many of us grew up hearing a kind of old-fashioned, even bombastic, diction from our parents and grandparents, and I think this still colours our work. I’m generalising hugely here; there are always exceptions.

That said, though, in the year and a half since my book came out, I’ve seen the ugly side of the need to categorise. I don’t know what the solution is, but I do know that both South Asian readers and other readers hold South Asian writers up to standards that are very obviously ridiculous when you remove them from this context. A brief selection: the idea that South Asian writers need to “represent” their countries and provide a full overview of the societies in which their stories are set; the idea that only South Asians are always writing about X, Y, Z (dysfunctional families, violence, longing, etc. etc.) even though, in fact, most writers everywhere are always writing about these things; the idea that our work is somehow less “authentic” because we don’t live in South Asia or choose to write in South Asian languages. Why can’t we move past all this nonsense the way American, British, French, German, etc. etc. writers have? I don’t think the answer is to do away with the category entirely, but I do feel rather disenchanted with the way people currently approach the category.

What I’m working on now: another novel, also set in Malaysia; various short stories. I would LOVE it if our book tours coincided again and we got to meet up and chat about all this in person!

Previous Sepia Mutiny coverage of Malaysia/HINDRAF items here: (Within that post are more links to other posts. Scroll down.)

You can read an SM (Amardeep) review of Preeta’s book here.

Comments closed on the other Guernica entry; you can comment on Hasanthika’s story, “Murder the Queen,” and/or the editorial note, here.