I am definitely not a Jay Sean (a.k.a. Kamaljit Singh Jhooti) fan. Not trying to hate, it’s just not my type of music. That being said, this makes for quite a visual (especially considering #2 and #3): 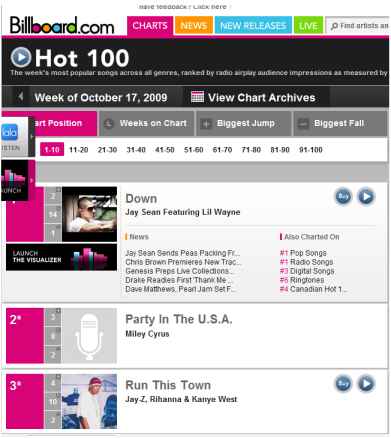 END_OF_DOCUMENT_TOKEN_TO_BE_REPLACED

If you’re looking for a scary flick to watch this Halloween season, look no further than Zinda Laash (thanks to Nilanjana and her brother Durjoy for the tip). Growing up, my siblings and I always complained because our parents didn’t let us celebrate Halloween. “It’s not a part of our tradition,” they would say. Boy, oh boy were they wrong. Halloween may not be, but vampire movies certainly are. Zinda Laash, which literally means “alive corpse” is the Pakistani version of Dracula. What, you didn’t know there were Pakistani vampires? Anything is possible in Lollywood, okay. Especially 1960′s Lollywood. (Although when I asked my parents about the movie, which would have come out when they were in high school, they had no recollection of it. Good two-shoes.)

According to Wikipedia, Zinda Lash was one of the most controversial Lollywood movies of its time. The movie barely made it past the censor board and even then sans its songs, which were considered too provocative in its time. (See this song for yourself and tell me if you think Bipasha and Mallika should give up their day jobs…)

Zinda Laash, which follows the basic plot of Bram Stoker’s Dracula, also has the distinction of being the first movie in Pakistan to be rated X. When the film opened July 7, 1967, it was designated “For Adults Only.” And with scenes like this, you can see why it was reported that a woman died of a heart attack upon watching Zinda Laash. Here, Dr. Bukari comes upon the house of Dr. Tabani, i.e. Dracula. There, he is entranced by the song and dance of Dr. Tabani’s assistant, played by the lovely Nasreen. But wait, was that fangs he just saw? (Hint: Skip the song by going straight ahead to 3:42.) END_OF_DOCUMENT_TOKEN_TO_BE_REPLACED

Imaad Wasif worked with Karen O (Yeah Yeah Yeahs) on the Spike Jonze directed Where The Wild Things Are movie. (Btw, excitement level for that movie? So incredibly high. But are only hipsters hyperventilating over it? Thoughts in the comments, please!)

Anyway, back to Imaad. From the Iggy blog:

Wasif grew up in Palm Springs, California, transplanted by two Indian parents who had eloped. They were both artists, natch and in the boat from India, their classical Indian records got drenched. The covers all melted together-but they still played. In the desert, he grew up listening to those and all the pop tunes that would warble in faintly over an old Sears radio. It’s those aesthetics that Wasif has since sought to combine-classical trills, pop weighed down by static, and the psych-folk inherent in a hippie-dippie desert upbringing.

His new album is due on October 13th. Check out his video for “Oceanic.” He’s backed by Two Part Beast:

Uh, so that mask is pretty terrifying. Photos of his uncovered face and other videos here. END_OF_DOCUMENT_TOKEN_TO_BE_REPLACED

Second, President Obama made the time to commemorate Gandhi ‘s birthday even as he hopped a plane to Denmark (I bet he wishes he’d stayed home and done **community service** instead now):

> On behalf of the American people, I want to express appreciation for the life and lessons of Mahatma Gandhi on the anniversary of his birth. This is an important moment to reflect on his message of non-violence, which continues to inspire people and political movements across the globe. > > We join the people of India in celebrating this great soul who lived a life dedicated to the cause of advancing justice, showing tolerance to all, and creating change through non-violent resistance. > > Americans owe an enormous measure of gratitude to the Mahatma. His teachings and ideals, shared with Dr. Martin Luther King Jr. on his 1959 pilgrimage to India, transformed American society through our civil rights movement. The America of today has its roots in the India of Mahatma Gandhi and the nonviolent social action movement for Indian independence which he led. > > Tomorrow, as we remember the Mahatma on his birthday, we must renew our commitment to live his ideals and to celebrate the dignity of all human beings. END_OF_DOCUMENT_TOKEN_TO_BE_REPLACED

I’ve been meaning to link to the recent study in Nature, “Reconstructing Indian Population History” (subscription reqd.) all week, but have been too busy (note: a document full of supplementary information is freely available here, though you need to be able to understand the way they do statistical analysis to make sense of all the charts).

As this is genetics, one would expect some comments from Razib, and indeed, one is not disappointed: here are Razib Khan’s comments on the study (see also this follow up post, where Razib creates his own plots based on the study’s data). The study gives data that relates to quite a number of different things, but the takeaway points seem to be : (1) South Indian and North Indian populations are genetically fairly mixed, and are (1a) more closely related to each other than to any other genetic/ethnic group; (2) the “Ancestral South Indian” genetic type is projected to most closely resemble a nearly extinct tribe in the Andaman Islands, the Onge (which is not to say that the Onge are themselves the “origin” of the South Indian gene pool); and (3) caste groups in the same regions of India show surprisingly high genetic difference in some cases, suggesting that caste endogamy within individual regions is a rather ancient practice.

According to Razib at least, the biggest limitation of this study is the small sample size (in the low hundreds). It seems clear that all of the conclusions being drawn from this study would be on stronger ground if they could go back and multiply the number of samples by 10.

Finally, there is a good, not overly technical synopsis of the Nature study at the Times of India: here. The TOI focuses on point (1) more than the others:

`This paper rewrites history… there is no north-south divide,” Lalji Singh, former director of the Centre for Cellular and Molecular Biology (CCMB) and a co-author of the study, said at a press conference here on Thursday.

Senior CCMB scientist Kumarasamy Thangarajan said there was no truth to the Aryan-Dravidian theory as they came hundreds or thousands of years after the ancestral north and south Indians had settled in India.

It is probably a mistake to read too much into this study, or even to accept the co-author’s bald claim that “there is no North-South divide” (Razib points out that it’s not that there aren’t genetic differences between North and South Indians — there are — but they fall on a gradient, rather than a solid barrier). Still, the study might have implications for South Indian activists who articulate a separatist “Dravidian” agenda, as well as North Indian “Aryan Invasion” proponents, who fantasize that they are really European. The only people who are really genetically “pure” on the Indian subcontinent are, it appears, the Onge. END_OF_DOCUMENT_TOKEN_TO_BE_REPLACED

The good folks over at Marginal Revolution have yet another interesting post about Desi schools. Here at SM, we first touched on this topic when we discussed the incredible outcome differences between government and private schools - even with low income students and often at a much lower total cost per student. A post last week noted one reason for poor performance at government schools – classic public choice economics as absentee teachers discovered how to game the system to maximize their salaries while minimizing risks to their slice of the public trough.

This week Alex Tabarrok points out a great study that cuts into the economics of teaching from a different angle – teacher incentives. The various teacher incentive options out there broadly work by directly compensating teachers based on tested educational outcomes achieved by their students. If poorly designed, the incentive programs run the risk of over-incenting teachers to mind-numbingly “teach to the test” (alas, even seemingly well intentioned govt policies like No Child Left Behind are often also criticized for the same thing). Still, what well designed systems do is dispel the notion that teachers are just in it for the greater good and – like all other professions – are actually motivated by pocketbook issues as well.

In this study, UCSD researchers Karthik Muralidharan and Venkatesh Sundararaman (with names like that, I suspect they’ll know a thing or 2 about the Desh), describe the results of a carefully crafted, multiyear program conducted in Andhra Pradesh (AP). The results are impressive -

END_OF_DOCUMENT_TOKEN_TO_BE_REPLACED

Due to popular demand I’ve got three more segments of the MTV Iggy interview with Naseeruddin Shah. Looking back, I can’t believe we asked some of these questions. He continued to be gracious, thoughtful, and startlingly candid: 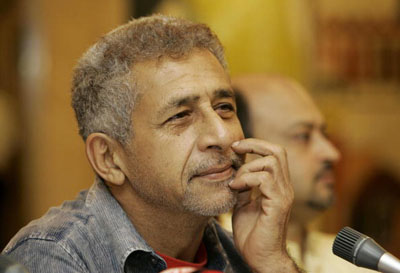 What’s the difference between theater and film? Legendary Indian actor Naseeruddin Shah explains to us why the two should be starkly delineated. “I can’t understand why they remake movies as plays — and then do them exactly like movies!” he says, referring those well-known Broadway plays in which helicopters crash and ships sink onstage. With his theatrical company, Motley, Naseeruddin is bringing back the lost art of Dastangoi, the ancient practice of storytelling in which the end of one story leads to the beginning of the next — bringing theater back to its original intent: one actor, one audience:

END_OF_DOCUMENT_TOKEN_TO_BE_REPLACED

The rumors have been confirmed. Us Weekly just reported that 39-year-old Top Chef host Padma Lakshmi is indeed pregnant.

“Model, author, and Emmy-nominated Padma Lakshmi confirms that she is carrying her first child after years of struggling with endometriosis, a cause for which she has co-founded the Endometriosis Foundation of America,” the rep tells Us of Lakshmi, 39.

“As a result of her condition, this pregnancy has been referred to by her physician as nothing short of a medical miracle, and due to its delicate nature, we ask/implore the press to respect Ms. Lakshmi’s privacy at this time,” the rep continues.

Yes, but on to the real question: who’s the baby’s daddy?

The baby’s father has not been revealed. Online reports have speculated Manu Nathan is the dad, but her rep denies that, telling Us he’s Lakshmi’s cousin.

Either way, this baby is gonna be one heck of a cutie. Congrats to the momma-to-be! END_OF_DOCUMENT_TOKEN_TO_BE_REPLACED