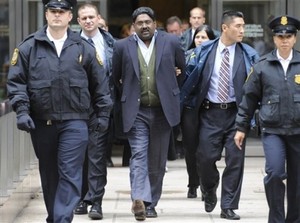 S. Mitra Kalita’s Wall Street Journal article, “Desi vs. Desi” frames the news of the largest hedge fund insider trading case in history as part of a broader story of desis immigrating to the United States, developing networks with other desis, and their progress in the technology and financial industries (desis might have found hedge funds to be more of a meritocracy than the “cozy world of investment banking”). Those industries are at the center of the allegations that billionaire founder of Galleon Group Raj Rajaratnam, conspired with director of consulting firm McKinsey & Co. Anil Kumar and Intel Capital’s Rajiv Goel, among other executives and hedge fund managers.

Media reports included coverage of the downward effect of Rajaratnam’s recent arrest on the Colombo Stock Exchange in Sri Lanka, where “even rumors of his trades can send the stock market up or down” and transcripts from wiretaps of the illegal conversations at issue. But “Desi vs. Desi” brings up another interesting angle on the story about the case’s prosecution. The recently appointed U.S. Attorney for the Southern District of New York who will be prosecuting the case against Rajaratnam is also desi. Preet Bharara, formerly the chief counsel to Senator Chuck Schumer, oversees hundreds of lawyers and high-profile cases, including the ongoing fraud case against Bernie Madoff. He’s been billed as The New Wall Street Nightmare.

Does Bharara being brown like the defendants complicate matters? Before you dismiss the question as silly or irrelevant, consider the comments from a couple of legal experts.

Sonjui L. Kumar, president of the North American South Asian Bar Assocation, says that Bharara “has to walk as fine a line as there is.” “White prosecutors arrest people all the time, but here you have this financial mogul who happens to be South Asian and then you have a South Asian attorney.” (WSJ)

“When you are rising in the mainstream, you have to prove that you’re not parochial or ethnic.” He drew a comparison to another instance of a top prosecutor leading the charge against criminal activity by individuals of the same ethnic background. “What former Manhattan U.S. Attorney Rudy Giuliani did to the mob is what Preet Bharara will do to Wall Street.” (WSJ)

The implication appears to be that Bharara should guard against any perception that he’s going easy on another desi. On the flip side, I wonder if guarding against that perception might lead him to move more aggressively against the desis faced with insider trading charges. Given popular support for tackling this kind of white collar crime I guess the latter possibility isn’t one that many of us would be too concerned about, but the issue of whether/how perceived bias becomes an issue in brown-on-brown courtroom dramas is intriguing and I don’t recall any episodes of Law & Order exploring this!

What do you think, readers and legal eagles? Does Bharara have something extra to prove in this high-profile case given the desi defendants? Or will this commonality be a non-issue as he pursues charges against all the defendants, desi and otherwise?

90 thoughts on “Desi vs. Desi on Wall Street”