Sorry for leaving you for so long — I’ve been tasting the kimchee over at MTV Iggy, immersed in all things Kpop (don’t knock it ’til you’ve read about it Abhi!) and other global music/pop-culture stylings for kids who were born in the 90s, IYKWIM? 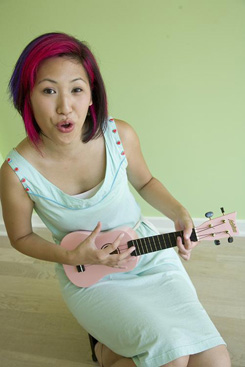 So anyway, I ran over here because I saw how much you enjoyed the “Date an Asian” video by Jen Kwok, and thought you might like to know more about the girl, the video, the cute older man in the sandwich made of sexy, and, of course, what her real dad thinks about all this:

What got you thinking about Asian men and dating? This is a topic I’d always wanted to address in my comedy, but wasn’t quite sure how. Last summer, I heard a joke on network television that was anti-dating Asian men. As an Asian, I was kind of pissed that this was broadcast as mainstream entertainment. As a comedian, I took it as inspiration to put a positive spin on the subject.

How did the video come about? After performing “Date an Asian” live at New York comedy shows, I was ecstatic that audiences really dug the message of the song — and most of all, they were having a great time with it. I wanted to reach more people, and knew the best way to do it was through a music video showcasing a ton of Asian hotties. I wanted this to be a video love letter to Asian men everywhere. My homie Soce, The Elemental Wizard produced the song and did a guest rap from the gay perspective, and fellow ukulele player Ballard C. Boyd came on as director. I put out the call to all the talented Asian guys I knew from the NY performance scene, and they totally freaking delivered!

Who is the cute older guy at the end of the video? That’s Phil Nee, who’s also known as the Godfather of Asian Comedy. He’s kind of like my comedy dad. This is a rough business, but he’s an amazing performer, industry veteran and all-around nice guy who was doing this long before any of us young whippersnappers hit the scene.

How does your real dad feel about all this? My dad hasn’t seen the video yet — he’s just not Internet-friendly. The only way he’ll ever see this video is if I fly home to California and show it to him — or if it’s on America’s Funniest Home Videos. (Seriously, I know I’m not the only one with a dad who laughs himself to sleep while watching AFHV. It’s like YouTube for old people.)

What’s your favorite dating story? My friend set me up with this really nice guy (who looked a lot like Andy Lau, by the way!). We’d only hung out once, but my birthday was coming up, so he bought me the special edition DVD of one of my favorite movies, “Apocalypse Now”. I don’t think he’d ever seen the movie before — or even knew what it was about. But there we were, on a second date, watching Francis Ford Coppola’s vision of the Vietnam War unfold in the dark. It was the opposite of a bonding experience. It taught me that revealing what a weirdo you are upfront can actually help you date more efficiently.

The MTV Iggy team’s got lots of Asian men and we all thought this was hilarious. What’s your strategy for dealing with the people who say it’s racist? The majority of feedback for “Date an Asian” has been great, and it truly warms my heart when people really get what it’s about and where it comes from. This project was done with affection for the Asian-American community, and was intended to be a response to negative stereotypes about Asian men. Also, it’s a comedy video, so I hope people will have fun with it and take it lightheartedly. Each person is entitled to his or her own opinion, and race is a particularly touchy issue. You can’t please everyone, but at the end of the day, I’m proud of this song’s message and the way that it was portrayed.

As a lot of commenters on YouTube point out, it’s not often that East Asians and South Asians include the each other when talking about ‘Asian’ anything. Was mixing it up a deliberate decision? Yes! First of all, almost all the Asian-American shows I’ve been booked for have had both East and South Asians performers and a “mixed” audience: Asian American Writer’s Workshop, Kollaboration, APA Heritage Festival, Jammin’ Asian, etc. Soce and I have performed “Date an Asian” live to the full spectrum of Asian guys, and I’ve always gotten the sense that they all knew I was talking about them.

How do you feel about white hipsters and Asian chicks? Was that, like, a trend? What the hell was that? It’s a recession. Why not date someone you can easily share jeans with? But on the flip side, I’m also seeing more white hipster chicks with Asian dudes. See? This song is working, man!

Read on to check out Jen’s thoughts about Margaret Cho, Julia Roberts’ twins, and the only thing that can unify us more effectively than bubble tea. Hint: it’s in the title.