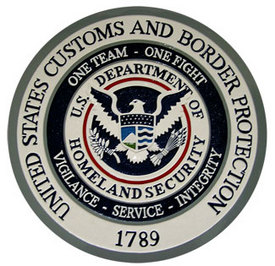 On a recent road trip from L.A. to Austin, my car was pulled over and hassled by the Border Patrol. By “hassled”, I mean that our car was questioned for longer than a normal amount of time which I simply attributed to the fact that the car was full of colored hair Muslim punks. We were allowed to pass without getting out of the car or a dog search. It was confusing too, since we weren’t crossing any national borders, we were just close to the Texas and Mexico border.

My “hassled” is nothing compared to the detention that Hamdan Yousef experienced at the Canadian border. He has a fascinating narrative on it over at Huffington Post.

I was returning home on a Sunday evening from a leisurely drive to Canada two weeks ago, and the Customs and Border Protection officer in the booth had a blank look on his face…Moments later, my car had been surrounded by heavily armed agents dressed in black and I was being asked to hand over my keys and step out of my vehicle.

I had entered the legal netherworld of the border, and it would be an experience to remember.[huffpost]

Yousef is detained and questioned while his car is searched. He eventually gets frustrated and goes up to the counter to figure out what is going on.

Why don’t you have a seat, he replied. Only it didn’t sound like a question. I’m sorry, is that an order? Two other officers had joined him by now, Why don’t you have a seat, he repeated. I had a feeling that I was on the verge of getting Tasered or tackled, or both. In a burst of inspiration, I remembered something I had read in one of the pamphlets: “If you feel that the examination was not conducted in a professional manner, ask to speak with a supervisor immediately.” Ta-da. I’d like to speak with a supervisor, I announced triumphantly. [huffpost]

The supervisor let’s him go within minutes and he asked her why he was chosen to be questioned.

There were two main reasons, I was informed. The short duration of my stay had raised flags. “You left Michigan at 5 in the morning, drove around the interior of Ontario, and are coming back the same day.” And you look well-rested, she said, as if that had been the nail in the coffin. [huffpost]

In the big picture, the minor hassling that I experienced and that Yousef had are far less severe than those experienced by many members of our community. People get detained on a regular basis, though most of the stories that I’ve heard of are those of people getting detained in airports. It’s rarer to hear stories affecting the Muslim or South Asian community at the Canadian and Mexican borders, though they do happen.

If you thought the current Obama administration would change these policies, guess again.

The Obama administration will largely preserve Bush-era procedures allowing the government to search — without suspicion of wrongdoing — the contents of a traveler’s laptop computer, cellphone or other electronic device, although officials said new policies would expand oversight of such inspections.

The policy, disclosed Thursday in a pair of Department of Homeland Security directives, describes more fully than did the Bush administration the procedures by which travelers’ laptops, iPods, cameras and other digital devices can be searched and seized when they cross a U.S. border. And it sets time limits for completing searches. [wapo]

Road trippers near Canada and Mexico – you have been warned. I’m curious as to the percentage of Muslim/South Asian profiling that happens at the borders than at the airports. We are at the end of summer, does anyone have a Border Patrol story from a recent road trip?