Kal Penn e-mailed me this week. That’s right. THE Kal Penn. When I went to check my personal gmail account two days ago there was an e-mail from “Kalpen S. Modi” sitting in my inbox. I gotta admit. I got slightly Desi girl giddy.

Dear Friend [he called me friend!],

Last month, President Obama unveiled United We Serve, an extended call to service challenging all Americans to help lay a new foundation for growth in this country by engaging in sustained, meaningful community service.

To encourage participation in service this summer and beyond, the Serve.gov website features a volunteer matching platform called All For Good that allows people to search for volunteer opportunities based on location and interests … The Administration is seeking to further engage the Asian American and Pacific Islander community and amplify outreach efforts in the cause of volunteerism.

I shortened the letter a bit, and as you may have guessed, it was a mass e-mail Kalpen sent. Not a personal one to me. All the same, the e-mail basically told me two things. 1. Kalpen Modi is now officially working in the White House. 2. Kalpen Modi might actually be doing some real work for the AAPI community. How could I tell? On Thursday’s conference call presenting the campaign to community leaders, Modi hosted it. Quite professionally. And nary a pot reference. END_OF_DOCUMENT_TOKEN_TO_BE_REPLACED

Via the New York Times blog, The Lede, I’ve been looking at a number of links regarding India’s Border Security Force (BSF). The starting point for the coverage in the Times was the news in the Deccan Herald that 178 women have, for the first time, joined the force. But the real story The Lede blogger, Robert Mackey, is interested in are the numerous reports of abuses by the BSF, specifically the killing of unarmed people on both sides of the India-Bangladesh border, including both Bangladeshis and Indian citizens. The Lede embeds the following BBC Channel 4 report on the abuses, which is pretty horrifying:

END_OF_DOCUMENT_TOKEN_TO_BE_REPLACED

Yes, Denver has jalwa. Hey, weâ€™ve even got the original Dhak Dhak girl in our midst! (And yes, I know some of you are Bollywood haters. Go wreak havoc on another post, ok?) When I moved to Colorado a few years ago, I was amazed to discover that I could watch many Bollywood films on opening night. Thereâ€™s tea and samosas at the concession, and hoots from the girls whenever Salman takes off his shirt. They hoot. I cringe. If he had better moves, he would refrain from such tasteless exhibitionism.

And thatâ€™s where Renu Kansal comes to the rescue.

Old-timers may recognize her from her previous avatar, but over the last three years, Renu has enrolled over 630 students at her studio, Bollywood West, and now serves as the semi-official Bollywood ambassador of Colorado. END_OF_DOCUMENT_TOKEN_TO_BE_REPLACED

The econ blogosphere is heavily linking a new article in Wired about the economics of Somali piracy. In addition to being a slickly produced piece (including an online game where you can dabble in some “Cutthroat Capitalism” yourself), Wired editor Scott Carney managed to get ahold of a Somali pirate and got unusually candid answers about the $$ and cents of their operation & the details often turn out to be incredibly, well, mundane & rationale.

“Ships with African or Indian crews are never profitable.”Far from fashionable excuses that the pirates are avenging illegal offshore fishing or represent some sort of anti-neo-colonial insurgency, the truth of the matter is a pretty basic risk vs. reward calculation –

END_OF_DOCUMENT_TOKEN_TO_BE_REPLACED

Here in Philly, we’re obsessed with our food carts. Don’t let anyone fool you. The best Philly cheesesteak is found on any corner of any Philadelphia street where the humble food cart proprietor (who’s usually an immigrant) makes a feast fit for the gods. Almost everyone here has a favorite food cart, be it Greek, Indian or Italian. Food cart offerings constitute a supplemental staple of almost every Philadephian’s diet. (Okay, fine. Perhaps mostly mine.I’m what you’d call a food cart veteran.)

END_OF_DOCUMENT_TOKEN_TO_BE_REPLACED 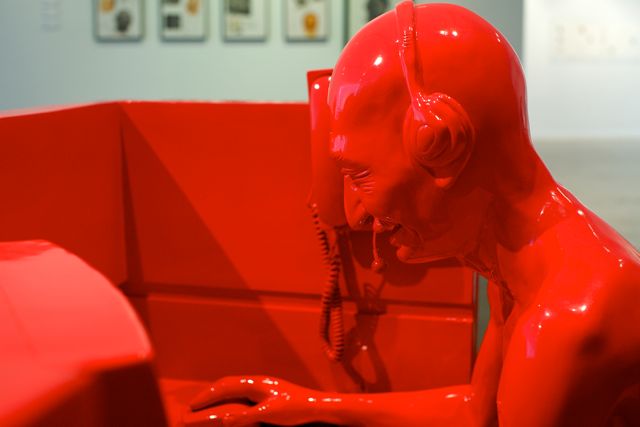 No, your eyes do not lie: This is Gandhi at a call center. This is from the exhibit Experiments in Truth, at the Aicon Gallery here in New York.

END_OF_DOCUMENT_TOKEN_TO_BE_REPLACED

Speaking of Desi Docs, one of the more interesting ones out there – Dr. Bala Ambati – recently wrote up his (learned) opinions about the path forward on healthcare reform. Haven’t heard of Dr. Ambati? He’s a real life Doogie Howser, M.D. –

Balamurali Ambati graduated from New York University at the age of 13 and Mount Sinai School of Medicine at age 17, becoming the world’s youngest doctor in 1995. He completed an ophthalmology residency at Harvard University, where he developed strategies to reverse corneal angiogenesis, after becoming a winner at the Westinghouse Science Talent Search and the International Science & Engineering Fair and becoming a National Merit Scholar.

Wikipedia teases us with a couple cryptic, saucy details about his personal life –

Balamurali and his family were detained in India for over 3 months in a suit related to alleged Dowry demands by the family for his brother’s wife, which delayed Dr. Ambati’s entry to the ophthalmology program for 2 years, leaving him to begin his residency in 1998. All charges against him were dismissed in October 1996 and all his family members were acquitted in June 1999.

Heh. While Wikipedia indulges in the surly, Dr. Ambati has been publishing his own thoughts in a blog for several years and he’s tackled quite a few of the issues of the day including healthcare reform…

END_OF_DOCUMENT_TOKEN_TO_BE_REPLACED

Three stories caught my eye in the New York Times this weekend, but I found reading all three in a row a little dizzying. All three relate to love, dating, and marriage, and say something about life in the Indian diaspora. But the pictures painted by the respective stories seem to have little to do with one another. What happens if we line them up together?

The first, from our news tab, is the story of a marriage between a Sikh, Parminder Suchdev, and an African-American woman, Danielle Jackson. Both have advanced degrees in public health and medicine, with resumes a mile long. Because the Times Weddings/Celebrations section is also kind of a “society” page, they also mention how successful and accomplished their parents are (especially Danielle’s parents, in this case; wow). I walked away thinking, what a wonderful, accomplished couple… and, man, am I a slacker.

Next, a second-gen named Ranu Sinha, in a first-person account of being introduced to a guy who at first seemed to be interesting because of the commonality of “Brownness and Bhangra.” But later she gets mad at him, and it leads her to a blanket condemnation of modern Indian culture:

When I took too long on a buffet line, he was furious for having been left to eat alone. I couldnâ€™t understand at first, but then it hit me: In India, solitude is feared more than anything else. Another time, when I surprised him with a homemade picnic, he agreed reluctantly and then left early. His parents needed him at home. For him, family obligations came first. The ladder of his priorities was long and I, the newcomer, found myself on the bottom rung. But it was from that vantage point that I grew up.

Underneath his modern American clothes, his American degree and his American accent, I discovered the beauty of an ancient Indian hierarchy that could not be taken off â€” of kinship, of family, of honor among men, of the traditions. In his world, the needs of the dozen always override the needs of two.

And with that, I uncovered, what I had never really understood. India is a place where love of tribe trumps romance-novel love.

Where heritage is still sacred and change skin deep. Where the sights, sounds, smells of Western modernity are mimicked, perfectly, as if Indians were characters on a Hollywood movie set. But when the lights go down and the costumes come off, India is exactly the same â€” just as she always was. A place, held together, by the kind of human bonds that last. (link)

Do you agree with her main point? I don’t; while it is true that there you will find a fair number of people out there for whom tribe and family work like this, it’s dangerous to extrapolate on the basis of one experience. Another thought: it’s sentiments like these that give second-gens (ABDs) a bad reputation with other Indians (“first know something about Indian culture before you turn up your nose, yaar”).

Still, at least some of what she’s saying rings a bell: “India is a place where love of tribe trumps romance-novel love.” Maybe, though that doesn’t mean the trump card always wins the hand.

Finally, Harsimarbir Singh, with a column in the Times describing coming to the U.S. to get a Master’s in Engineering at Duke. Most of it made me roll my eyes, though I did chuckle at the following paragraph:

Though itâ€™s been a short time for me at a top-tier American university, I have had the opportunity to see the party culture that the American student craves. The American passion is extended here as well, with young guys and girls passing out and losing control after consuming alcohol. Being a teetotaler, I have stayed away from drinks, but not from the joys, of the American celebration. (link)

That last sentence, somehow, made me laugh. END_OF_DOCUMENT_TOKEN_TO_BE_REPLACED

Our newest guest blogger comes to us from (yes, you guessed it) Philadephia. She is a journalist and blogger who many of you are probably familiar with by her comments on SM, or by reading her blog:

PhillyGrrl is your (almost) typical phillygrrl. She likes talking about Philadelphia all the time. It got a little annoying. Especially after she sent out 50+ forwards every day, annoying her friends and relatives to no small end. Now she annoys the general public with the random things in her head. She also writes for uwishunu and Phawker. [Link]

Don’t worry. She will not be writing only about desis in Philadelphia. She will probably cover some from Pittsburgh as well. I also expect her to reveal some interesting links between South Asian Americans and the Continental Congress. Please join me in welcoming PhillyGrrl.

END_OF_DOCUMENT_TOKEN_TO_BE_REPLACED

..”It allows people to more reliably and more cheaply slaughter animals,” says Lawrence Guy Straus, a paleoanthropologist at the University of New Mexico in Albuquerque, who was not involved in the study.

This development, along with an ice age which transformed the proto-Indian subcontinent into a habitat patchwork created effects that are arguably still with us today. For example, in addition to species biodiversity, recent DNA research also suggests that Desi human biodiversity also began about this time –

..In India, however, this ice age shortened the monsoon season and transformed what had been a rather homogenous tropical landscape into a patchwork of savannahs and deciduous forests bordered by desert, Petraglia says.

..These changes almost certainly would have split up ancient populations, but they could have spurred their growth as well, Petraglia says. By treating the mitochondrial DNA of contemporary Indians as a sort of molecular clock, the researchers documented an expansion in Indian genetic diversity dated to around the time of this ice age.

So while today’s marauding bands of Silicon Valley desi dudes are armed primarily with laptops, their predecessors were armed with the smart bombs of their day. Cool.