First there was Indra, then Vikram, then Sanjay and now there’s Ajay: the new President and COO of Mastercard. Ajay Banga will be the number two man at the number two piece of plastic;”the heir apparent to Chief Executive Robert Selander.” 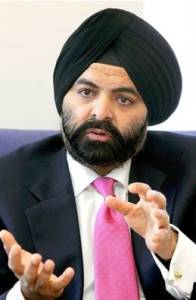 Banga comes to Mastercard from Citibank, where he had been in charge of their Asia-Pacific business and had been considered by the board for CEO before they turned to Pandit (one of the 20 worst CEOs EVAH!). Given that Citibank shares are down 85%, Banga must feel like he dodged a bullet by ending up at a smaller ($5 billion vs. $50 billion in revenues) but profitable company. While business is much harder for credit card companies than it used to be, Mastercard is just a middleman collecting fees by processing transactions and so it less likely to be affected than the banks and investors who hold now questionable credit card debt.

I’m also quite chuffed to see that a man in a turban and beard can phase through the corporate glass ceiling, especially in banking. In that respect, I think it helped that Banga’s career has been mainly international. In the US, minority executives and white executives follow different tracks (HBS study), but 14 years ago Banga was Marketing Director for Pepsi in India where he would not have been an outsider.

I saw my very first episode of Mad Men last night (while working on this post) and I found myself unable to empathise with the characters because I couldn’t relate to any of them. That was a world that I and most of my white friends (who are non-WASPs) would have been excluded from instantly, no matter what our credentials. Nor was this permeating predjudice limited to the 1950s: I heard Dershowitz recall that he couldn’t get a job at a top law firm in the mid-60s after clerking for the Supreme Court because he was Jewish!

So here’s to Ajay Banga and the others who will come after him, because a crack in the glass ceiling … is priceless.

29 thoughts on “A turbaned executive? Priceless”