Leander Paes’ triumph at the French Open was cause for great celebration, especially for me and others members of the Association of Rabid Fans of Doubles Tennis. We threw a party last night and really had a good time, all three of us.

Paes and Bhupathi won three Grand Slam titles together, the last in 2001, before having some sort of falling out, much to the chagrin of Indian tennis fans. They did get back together for last year’s Olympics, somewhat reluctantly, and lost in the quarters to Stanislas Wawrinka and some guy named Roger.

Paes would love nothing more, I’m sure, than to finish his career with more Grand Slam titles than Bhupathi. And with his former partner Navratilova cheering him on, anything is possible.

“Martina has been a soulmate for many years. We’ve been through a lot in life, especially me in the last eight years. She’s been along with me, supporting me, guiding me at times,” said Paes.

“When I was diagnosed with cancer and I couldn’t play, she basically stayed away from the game and didn’t play mixed doubles until I came back.”

“Whenever I look at a person like Navratilova, she gives me a lot of inspiration. It was strange that just at the end of the second set when we were getting a bit nervous and a bit edgy, she came out there and was just making eye contact.

“Lukas served three doubles faults early in the third set. I told him at one point, Martina is out there. Come on. Have a look at her. She’s inspiring us.” [Link]

Here’s a pic of Paes hugging Navratilova after his victory, with a familiar face applauding. Caption anyone? 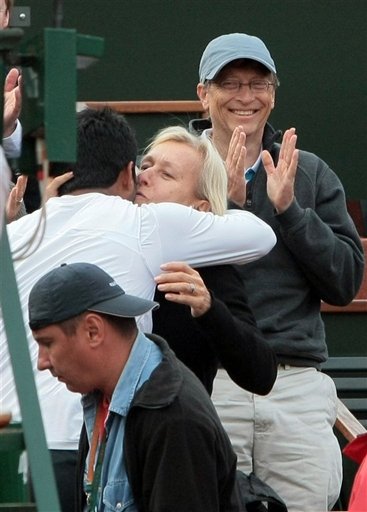