Picture this: You’re a single woman in your early forties who 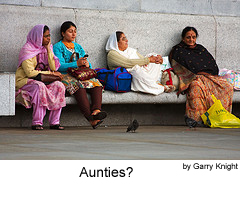 has taken a liking to a handsome twenty-something guy who lives in your apartment building. Hey, if it works for Demi, why not you? So you gather the courage and leave a box of samosas at his door, with a note that says, “Just made a batch and thought you might like a few.”

An hour later, there’s a knock at your door. He’s standing there in shorts and a tank top, looking as studly as ever. “The samosas were great,” he says. “Thank you for thinking of me, Aunty.”

Well, that scenario probably never happened to Shobha Tharoor Srinivasan, but she’s nevertheless peeved about being called “aunty” by people she barely knows, as she states in this month’s Khabar (her piece originally appeared in India Currents, linked below).

Today, the title â€œauntyâ€ is so overused and misused that it has lost its position and meaning. Indian-American children are taught that every adult female is a potential aunty; many carry this presumption to the conclusion that any adult female older than them can be an aunty. Iâ€™m not referring to school children here, but to those I see as adults, the lipsticked and bearded variety, who ought to know better. Donâ€™t get me wrong. I donâ€™t have a problem with terms like ammayi, or cheriamma, or edathi, all specific Malayalam words that acknowledge individuals who are close family members and deserve rightful respect in the familyâ€™s pecking order. There are equivalent terms in every Indian language: terms like maami, mausi, and didi that all validate close family connections. But amongst English-speaking Indian Americans, the frequent use of â€œauntyâ€ or â€œuncleâ€ is more often an example of lazy speech, or a desire to bump the individual in question into the category of doddering older-other, than it is a thoughtful moniker of respect. Therein lies the problem. [Link]

Srinivasan, Director of Development at SVILC, Santa Clara Countyâ€™s Independent Living Center (and aunty to Shashi Tharoor’s sons), notes the importance of aunties in our culture — “Children have always needed aunties: women who were caring and courageous enough to share in the act of mothering” — and offers some guidelines on using the term “aunty”:

If I have not known you when you were a child, and been a part of your life as you learnt and grewâ€”I am not your aunty.

If you are an adult with or without furrows on your temples, and our paths have never crossed beforeâ€”I am not your aunty.

If your children are younger than mine, or you are the same age as my grown children, but I am meeting you for the first timeâ€”I am not your aunty.

And if youâ€™re just not sure what to call someone? Ask; donâ€™t assume. [Link]

I’ve been called “uncle” a few times and not just by my nephew and nieces, so I’d like to offer some guidelines too. Whatever your age, you may use the term “uncle,” as long as you use it in sentences like these:

“Sure, Uncle, I’ll babysit your children every Friday night.”

“May I mow your lawn for you, Uncle?”

“To my Uncle Melvin, I leave all my worldly possessions …”

“Here are some samosas I made for you, Uncle.”