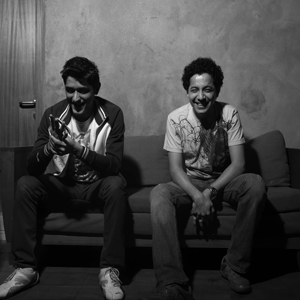 In the ten plus years since Asian influenced electronica started making the musical rounds, the sound has gone in various directions. From the pulsating Indian classical-oriented tabla and bass to bollywood dub step, the music has evolved and morphed with other styles of contemporary and popular music. A prime example of this evolution can be found in Hello Hello, the most recent studio album put out by the New Delhi-based duo of Tapan Raj and Gaurav Raina, collectively known as the Midival Punditz. Hello, released on Six Degrees Records, sees the evolution of Punditz’s engaging electro-desi sound into new directions I haven’t see the Punditz delve into in past albums. Don’t worry though, it’s mostly a good thing!

The album’s opener, Electric Universe, is a strong tune, that marries a bansuri based melody with the now very-trendy vocoder lyrics and an up-tempo western dance groove. Universe is a good start to a very good album, and serves as a nice introduction of the diverging sounds to come. The last track is an acoustic version of Universe, except with unadulterated vocals and acoustic guitar by fellow Asian-massivist Karsh Kale. In fact, Kale’s influence on the album is heavily felt, with credits on more than five of the album’s 11 tracks.

With Hello, it’s clear that the Punditz haven’t forgotten where they came from, or the type of music that has led them to be called “the sound of 21st century India.” The album has the raga and folk influence I have come to expect and love from the Punditz, but also a classic rock and pop influence that one might hear in the nightclubs of Delhi, Bangalore, or Bombay.

With songs like Atomizer, and Har Ek Baat, which combines the poetry of Ghalib with the Punditz’s tabla and bass beat, the range of the album becomes very clear. For me though, it’s tracks like Sun Mere Sanam, Naina Laagey (my favorite on the album), and Drifting, that keep me listening over and over again. All three feature a skillful layering of traditional Indian sounds and instrumentation, and seamless incorporation of vocals (in the first two) and modern electronic production. (Six Degrees is offering SM readers a free download of Drifting here). And for the classic-rock fans, the Punditz have included their hommage to Led Zeppelin’s “Four Sticks,” which builds, quite nicely I think, on the Indian sounds of the original.

While I liked most of the album, I thought some things were off. On Tonic, the folk-influenced vocal sounded disjointed with the beat, and the only redeeming thing about the amateurish rap was the line I chose for the title of the posting. But, one or two tracks aside, the Punditz come through with a solid album, which I’ve had playing on repeat for the better part of the last two weeks. Check it out (the album is available on itunes and amazon), and let us know what you think. For those of you on the left coast, the Punditz will be appearing this Thursday (4/16) at the Mighty in San Francisco, with Karsh Kale. Nothing beats seeing these guys live.

12 thoughts on “In My Gully, Rupees Beat the Dollar…”