On my way to the East Village last night, I stopped by a store which is arguably ground zero for shameless Orientalism in NYC, East-West books.

This store is exactly as over the top and ridiculous as the name suggests. It’s the kind of place where one (White) salesman was dressed in a very handsome lime colored Chinese silk jacket while another (white again) had 3 sandalwood malas on one arm, several around his neck, and at least one on the other arm. Their list of books and other offerings is very left coast, the sort of thing I encountered regularly when I lived in the Bay Arya, but rarely see in skeptical, ironic NYC.

Soon after I entered, in the CD rack, I found Jaya Lakshmi’s “Jewel of Hari.” I love the blurb that introduces the album: Yoga! Mantras! Flamenco! Veils! It’s nearly a perfect listing of New Age clichÃ©s, it has everything except Zen, Native Americans and gnostic wisdom. 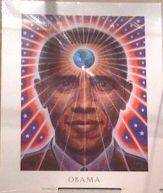 My favorite item on sale, however, was the image of Obama as transcendant being, his third eye of wisdom a glowing globe. You see, this way he’s both seer and seen, because instead of an eye, we have the world which is perceived by the eye …. no, I didn’t get it either but then I’m still working on one hand clapping so more advanced koans (and Cohens) are beyond my meager capacity.

Still, I know that somebody, somewhere has this up on their wall, perhaps garlanded and on an altar, and this thought provides me with an endless source of mirth.

p.s. apologies for the poor image quality, these were surreptitious cell phone shots, not photos from a real camera.

56 thoughts on “The perfect blend of East and West”