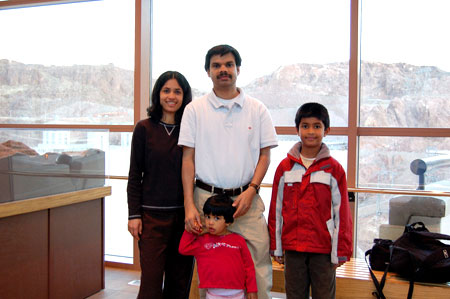 A heart-breaking story out of Santa Clara, in Northern California. Devan Kalathat took his own life– but only after shooting his wife, his two children, and three other relatives (including an 11-month old baby girl) who had just arrived from India.

A father is suspected of killing his two children and three other relatives before taking his own life in an upscale neighborhood of Silicon Valley where the family had recently moved.

Authorities were still searching Tuesday for a motive in Sunday night’s slayings, though they have said financial issues did not appear to be a factor. [Yahoo]

Everyone died except Kalathat’s wife, who remained in critical condition Tuesday with multiple gunshot wounds in her upper body. She managed to stumble outside and collapse on a concrete pathway, where she was found in a pool of blood by neighbors. Along with the bodies of five others, including his two children and niece, police found Kalathat inside with a self-inflicted gunshot wound. The two handguns were laying nearby. [SJMercuryNews]

Various reports I’ve read indicate that Kalathat had just moved his family in to the home (which complicates investigating the crime, since their neighbors didn’t know them well); his brother-in-law, Ashok Appu Poothemkandi, who had worked for Hewlett-Packard in Bangalore, had just moved to America with his wife and infant daughter to start a two-year assignment here.

Relatives from India say Kalathat and his wife’s brother quarreled. But so much is still unknown.

“I can’t imagine him losing his cool like that,” said a neighbor who lived next door to the couple in Sunnyvale from 2000 to 2003. “I would have never imagined him having guns. They don’t seem like the kind of people.”

During a press conference Tuesday afternoon in which they identified the dead for the first time, police would only say that they were investigating “family dynamics” as the motive for the killings â€” one of the deadliest in Santa Clara history. The couple apparently didn’t have financial problems. His engineering job at Yahoo appeared secure… [SJMercuryNews]

Some of you may recall a similar story from last year, in which financial problems were the motive for the murder of an entire family. Abhi blogged about it, here. Perhaps because of this, or due to the current economic climate, almost every news report I’ve read has emphasized that money doesn’t seem to be a factor in this sad case.

The murderer’s father-in-law sheds light on some of those “family dynamics” the police are investigating:

In a story posted Tuesday, the Times of India had an interview with Kalathat’s father-in-law, Appu Master, an 80-year-old retired school teacher, in Tamil Nadu. Master told the news organization that the shooter had a “quarrel” with Master’s son, Poothemkandi. [SJMercuryNews]

Poothemkandi was at the home for a housewarming party, but he may have been staying with his sister and brother-in-law, as well:

The man who gunned down his family in an apparent murder-suicide was an engineer at Yahoo Inc. who was helping his brother-in-law settle into Silicon Valley after arriving from southern India, police said Tuesday…

That was around the same time that Kalathat legally bought his second .45 caliber semi-automatic handgun, according to police. He used that weapon, as well as a handgun purchased in February, in the shooting spree, they said. [sfgate]

People who know Kalathat seem shocked at the crime:

Abhilash Appu, 32, another brother-in-law of Kalathat, told the San Jose Mercury News that he had no idea why the bright, quiet man would turn on his family. “That we don’t know,” Appu said, speaking by phone from a village in the Indian state of Tamil Nadu.

Raji Rajan, a Sunnyvale lawyer who worked with Kalathat and his family to legally change their names in 2002, said she had vague recollections of him as “a very civilized, cultured and gentle guy.” [sfgate]

Please be respectful with your comments. While we don’t know much regarding this calamity at this point, we do know (based on past experience) that relatives and friends of the deceased often find their way here; they don’t need additional pain from insensitivity, assumptions, conjecture.

My prayers are with the families affected by this senseless act of violence. A young couple is dead, three of Appu Master’s grandchildren are gone and a woman is fighting for her life. What a tragedy.