AMEISH – “Save Ourselves” from Secret History on Vimeo.

Straight outta Los Angeles, born and raised, 25 year old unsigned artist Ameish Govindarajan is hitting the hip hop scene by storm. Taking a unique ‘web 2.0′ tactic of dropping his first single Save Ourselves with a viral music video even before an EP is pressed and on itunes, Ameish is part of the new generation using the internet to spread the lyrics. I stumbled across this video in my inbox last week and was blown away. The visuals were clean and crisp, enhancing the smooth hip hop hook and lyrics. I couldn’t get the song out of my head all week.

I sat down (virtually) with Ameish to ask him a few questions about life. Here’s what he said.

I saw on your facebook profile that you graduated from UCLA with a pyschobio degree. That’s quite the change from hip-hop… How’d you first get involved with hip-hop? How do your parents feel about your musical foray?

Yes, that is kind of an unexpected background for an artist, I’ve been blessed to have the opportunity to be educated. Music has always been around me since I was young, but the first time I heard hip-hop was around ten years old. I picked up a tape off the ground, which I still have, Brand Nubian. And from there I fell in love with the beats and rhymes. I was an avid listener for five years, listening to everything from Ice Cube to Wu-tang. Me and my boys started rhyming at the age of 15. We used to record on a karaoke machine and rhyme on top of the radio, then on instrumentals. My parents are fully supportive of whatever my passions are.

I saw this video last week and thought it was really polished looking and you have a great sound. I’m surprised that you are still unsigned and that I haven’t heard of your music yet. Is this your first single?

Yes, this is my debut single off the “Save Ourselves” EP. There’s plenty more music to come.

Who did your music video?

The video was a collaborative effort from four parties. The directors were from the crew Secret History. They’ve done videos for other rap artists like The Grouch and Paris. The producers are Bucks Boys Productions who worked on Kanye West’s “Flashing Lights” video. The director of photography is from the ReelRoots crew, and Digital Gypsy provided the rest of the production.

I came up with the concept for the video as I wrote the song, and these productions companies were able to bring my vision to life.

Who is the white boy in your video?

Actually, the “artist” in the video, his name is Jesse Nolan. A really talented artist also from LA who is the lead singer of the indie rock band called The Cheat. You should check him out.

What is the song about?

“Save Ourselves” is not only a song to me, but a message. It’s three real life stories that are going on across the world as we speak, and how we are all connected. “Save Ourselves” to me means that we all need to be aware of others and that we are all one in some way, shape or form. The video starts in an art gallery where people glance at a portrait and move on to the next, but don’t see that there is a real story behind each snapshot, and so the pictures come to life in the video to help them recognize that others are actually living through such situations and that we all need to step up and contribute.

Being in Los Angeles, it feels that everyone is a hip hop artist and everyone has a project on the side. How do you think your music sets yourself apart from the rest?

I don’t think that everyone in LA is a hip-hop artist, but its a beautiful thing that so many people are pursuing their passions while grinding. Being around this spirit makes me more hungry and also produces cool collaborations.

My music is a little different because there is a message in every song and a part of me in every song. My eclectic influences are incorporated into the music, which helps create a new sound. I’m not afraid to try new things.

How do you think your identity as being American and South Asian has influenced your music?

Being from such a strong cultural background has definitely helped my music. When I was younger I studied and played tabla, which helped me understand complex rhythms and has definitely influenced my hip-hop.

I feel like your music has more of a social justice vibe than the other hip hop that exists out there. Am I wrong? Are you intentionally trying to spread conscious hip hop?

Yes, “Save Ourselves” is a conscious song, but I just strive to make quality music, and let the audience take from it whatever it means to them. Some may just like the music or the hook. Others will vibe off the lyrics and feel the message. To each his/her own.

Who are your musical influences?

My musical influences range from Rakim to Radiohead. From Nina Simone to Nitin Sawhney, and everything in between. As you can tell, I just love music.

What are the top three CDs in rotation on your ipod at this moment?

I’ve been listening to up and coming artists, Colin Munroe, from Toronto; Wale from D.C.; and Adele.

In your wildest dreams, who would you like to collaborate with someday?

I would love to work on a song with Mark Ronson, John Legend, Lupe Fiasco, or Damian Marley. 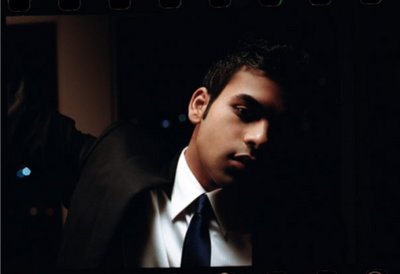 There are a handful of South Asian hip hop artists out there and even fewer that make it Top 40 big. What do you think of these artists that came before you and do you sense a shift in the diversity of the music industry?

I feel what these South Asian artists have done before me and will continue to do. I myself used to love listening to Apache Indian. But I’m not trying to be the biggest South Asian artist. I’m trying to be a quality artist that so happens to be South Asian. I think the landscape of the music industry is changing in terms of its diversity, but it is not yet where it needs to be.

Where can we hear your music live?

Live performances are soon to come. We’ve been busy in the lab cooking up more material.

Do you have a CD people can buy? Music that people can download? Where can readers get more!?!?

Yes, the Save Ourselves EP will soon be available to download on itunes. But for right now, you can listen to more music right now and watch the Save Ourselves video at Ameish.com, where anyone can connect with me via Myspace, Facebook, and Twitter.

27 thoughts on “Save Ourselves, the Ameish Way”