It’s not easy to get a green card in America, and harder still to become a citizen. However, under a new recruitment program for the armed forces, if you’ve been in the US for 2 years and have the skills the military needs, you can get your citizenship in as little as six months from the day you begin service. 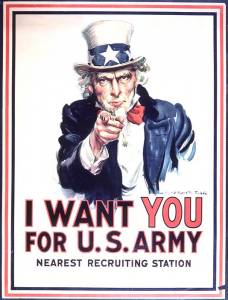 While in the past recruitment was open to green card holders (with 8,000 a year signing up for the military) this is the first time recruitment has been opened to temporary immigrants.

The program targets two groups: medical professionals and those with language expertise including speakers of “Arabic, Chinese, Hindi, Igbo (a tongue spoken in Nigeria), Kurdish, Nepalese, Pashto, Russian and Tamil. [link]” In other words, this is a program tailor made for desis (although not exclusively so)

The only catch is that you have to serve out your time in the military honorably, or you might lose your citizenship (!) even if you received it in the first six months of service:

Language experts will have to serve four years of active duty, and health care professionals will serve three years of active duty or six years in the Reserves. If the immigrants do not complete their service honorably, they could lose their citizenship. [link]

What made the US military realize their sudden love for brownz? They’re not getting the right kinds of recruits for service in Afghanistan:

Recruiters’ work became easier in the last few months as unemployment soared and more Americans sought to join the military. But the Pentagon, facing a new deployment of 30,000 troops to Afghanistan, still has difficulties in attracting doctors, specialized nurses and language experts. [link]

(Can somebody explain why the military thinks it will need Igbo and Tamil speakers in Afghanistan? I’m a bit puzzled by the mix of languages that they’re trying to pick up.)

Part of this is the military looking for specific skills, but part of it is a desire to raise the quality of recruits. Right now almost 1 in 5 has a waiver for a past criminal record or a health problem. A similar number don’t even have a high school diploma. Recent immigrants are expected to have high skills, and cannot have a criminal past:

Military figures show that only 82 percent of about 80,000 Army recruits last year had high school diplomas. According to new figures, the Army provided waivers to 18 percent of active-duty recruits in the final four months of last year, allowing them to enlist despite medical conditions or criminal records. [link]

While this is just a trial run, officials are looking at temporary immigrants as a source of up to 14,000 volunteers or 17% of army recruits each year!

The big challenge this program faces is political pressure from nativists who would rather have American-born recruits with a criminal past and no high school diploma than higher skilled and more closely vetted recent immigrants:

A preliminary Pentagon announcement of the program last year drew a stream of angry comments from officers and veterans on Military.com, a Web site they frequent… Commenters who vented their suspicions of the program on Military.com said it could be used by terrorists to penetrate the armed forces. [link]

It’s also possible that this security suspicion is just a fig leaf for naked protectionism, of the old guard wanting to keep certain jobs for Americans (that is citizens and green card holders). We’ll see which proves stronger – market forces or politics, in the coming years.

65 thoughts on “Speak Hindi? Join the army and become a citizen in 6 months”