News that Sanjay Gupta has been offered the position of Surgeon General has produced the classic trifecta of Golidlocks responses: Is he too sexy for the job, not sexy enough, or does he have the right amount of smouldering sex appeal to keep pace with Obama, Biden, Daschle and Hillary Clinton?

Too sexy for this job: 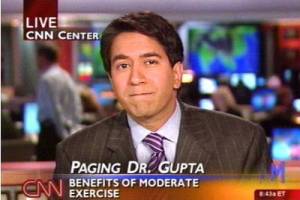 My friend Dr. B objects to the idea that SG could be the SG, saying that he lacks the gravitas for the job, and that she would have preferred a more established, less erotically charged nominee in the C. Everett Koop mold.

Similarly, when Dr. Amonymous asks for SG’s policy qualifications, pointing out that “The Surgeon General functions under the direction of the Assistant Secretary for Health and operationally heads the 6,000-member Commissioned Corps of the USPHS, a cadre of health professionals who are on call 24 hours a day, and can be dispatched by the Secretary of HHS or the Assistant Secretary for Health in the event of a public health emergency.” [wiki], it’s clear that what he’s really saying is … “how can I take him seriously when he’s so pretty?”

(Manish has a variant of this argument, claiming not that Gupta is too sexy for the job, but that the job isn’t sexy enough for him, calling it a step down from his current position to one that pays less and has less influence.)

They do have a point since “Gupta was named one of the Sexiest Men of 2003 by People magazine.” [wiki] It’s hard to see what more objective measure of sexiness there might be.

Not sexy enough for this job:

There are those, however, who reject People Magazine’s imprimature as if it were some illegible doctor’s scrawl on a prescription pad, arguing brazenly that Dr. Gupta doesn’t have the intellectual honesty sex appeal necessary for the position. 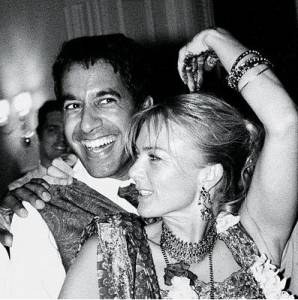 These objections usually revolve around a clash that occurred between SG and Michael Moore. For example, (desi doc dj blogger) Los Anjalis argues that

Clear conflicts of interest prevailed in Gupta’s discussion of the health care system. As a journalist, I’m sure he would have fact-checked better — if not nudged by CNN’s advertisers interests. I’d like our top doc in the White House to be conflict-of-interest free, in the name of restoring integrity to our public health system. [Link]

I don’t have a problem with Gupta’s qualifications. But I do remember his mugging of Michael Moore over Sicko. You don’t have to like Moore or his film; but Gupta specifically claimed that Moore “fudged his facts”, when the truth was that on every one of the allegedly fudged facts, Moore was actually right and CNN was wrong. [nyt]

What they’re really saying here is Sanjay Gupta lacks the essential qualification to be a sexy South Asian male – facial hair. How can he be sexy without at least a mooch or a goatee?

For example, this clash between Moore and SG? It’s really about beards. Moore has had one from time to time, and it’s not clear that SG has the chin-whisker fortitude to grow one if he tries! Similarly Krugman has facial hair, so he must be both sexier and right!

Just the right amount of sexy

Lastly, there are those who argue that a sexy SG is just what the SG’s position needs. Our very own Siddhartha argues that the position is one of public health news anchor, kind of like the puppet shows that come around to elementary school to make eating vegetables and not-smoking cool. It’s impossible to be too good looking a talking head.

And indeed, this is in the SG’s official job description:

The Surgeon General serves as America’s chief health educator by providing Americans the best scientific information available on how to improve their health and reduce the risk of illness and injury. [SG's official website]

Los Anjalis agrees with part of this argument as well, in a wise yoda-like kind of way:

So, yes, qualified he is, Dr Sanjay Gupta. He does a lot of just that — he’s a journalist who does a lot of work on health information [link]

Lastly, there is that important constituency to be satisfied, the Gupta Girls, all of whom agree that he is, indeed, just the perfect amount of animal magnetism for the job.

What do I think? Personally, I think y’all are tripping. This is a feint, a distraction, designed to take your eyes off the political scandals around Blagojevich, and the mis-steps on Panetta. If you’ve watched O play basketball, he’s pretty predictable. He usually fakes left before passing right. He knows that Sanjay Gupta can’t afford the pay cut and will turn the job down. No, the next Surgeon General of the United States will be … Sonal Shah