In case you’ve been living under a rock for the past week or so, you will have heard about the ways in which it is being implied that Obama is either an Arab, or a terrorist, or both (because, what’s the difference really?). 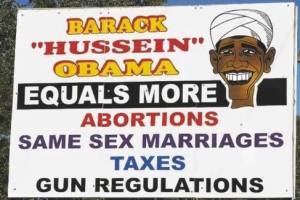 To the right is a billboard from the swing state of Missouri. It appears to be a spontaneous emission of racism by somebody local, rather than a calculated political gesture associated with a campaign, but in many ways that makes it scarier to me.

The tenor of the race has changed, and gotten nastier. Back in February, McCain clearly dissassociated himself from a speaker at a rally who kept referring to Obama as “Barack Hussein Obama” and the campaign followed suit. However, in the last month Obama’s middle name has cropped up more and more often at rallies, including one where ” a Florida sheriff ranted about “Barack Hussein Obama” at a Palin rally while in full uniform.” [NYT]

This even arose recently at a McCain rally where McCain’s response was quite revealing:

UNIDENTIFIED FEMALE: I can’t trust Obama. I have read about him, and he’s not — he’s an Arab. He is not…No?

SEN. JOHN MCCAIN (R-AZ), PRESIDENTIAL NOMINEE: No, ma’am. No, ma’am. He’s a decent family man, citizen, that I just happen to have disagreements with on fundamental issues. And that’s what this campaign is all about. He’s not. Thank you. [HuffPo]

Ideally, I would have liked McCain to have said three things in his answer:

Neither campaign has managed to make that last point, and it’s a very important one.

McCain did not say that Arabs are decent people, instead we are left to infer that “Arabs” and “decent, family man” are somehow antonyms. Barack Obama should not be let off the hook either as he is just as complicit. Earlier when his Democrat primary opponents were trying to smear him, he distanced himself from being Arab and Muslim (which of course he is not!), but did not stop that conversation and say Arabs and Muslims are just as American as anyone else. [Link]

This is the same point that came up after 9/11 for Sikhs. We wanted to clarify who we were, but we wanted to do so without demonizing anybody else:

There were many that immediately tried to disassociate themselves from Muslims and screamed, “We are not the enemy.” Of course, implicit in this was the argument that “Muslims are the enemy.” Then later as cooler minds prevailed, in an amazing moment which I still take great pride, Sikhs left behind such divisive discourse and changed their call to “We are all Americans.” [Link]

I am not a Muslim. I am not an Arab. Barack Obama is also neither of these things. But you know, if either of us was that should be OK too. That’s what it means to me to be American.

Related links: Two links about the woman at the McCain rally, a close up video of her remark, and an interview with her later where she explains her world view. From the lHuffPo: Is Muslim The New Queer? And Cambell Brown makes a similar argument.

p.s. You might be interested to know that one of the terrorist plots foiled by the FBI after 9/11 involved a plot to bomb the office of a (GOP) Arab-American Congressman and a large mosque. In this case the plot was quite advanced, it had been planned for some time and “federal agents waited until the last component of the bomb — explosive powder — had been delivered to make the arrests.” [Link] If it had gone through, close to 1,000 people might have died.

87 thoughts on “Not that there’s anything wrong with that”