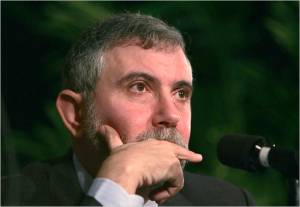 Mr. Krugman received the award for his work on international trade and economic geography. In particular, the prize committee lauded his work for “having shown the effects of economies of scale on trade patterns and on the location of economic activity.”

He has developed models that explain observed patterns of trade between countries, as well as what goods are produced where and why. Traditional trade theory assumes that countries are different and will exchange different kinds of goods; Mr. Krugman

Although most of Krugman’s groundbreaking work was in trade theory, and despite the Rise of India being one of the biggest trade stories of the last decade, I wasn’t able to dig up too many comments from him about the Desh. The exceptions, however, are pretty interesting…

Business Standard: Assuming you were at the helm of India’s finances at this point, what would you be doing to steer the economy?

Paul Krugman: Well, I’d probably be advocating pressing ahead with reform… imports need to be liberalised. India should stop talking of disinvestment and start talking privatisation. They should deregulate as many remaining areas as possible. You see, India has had incomplete reform so far.

It’s much more than what was there earlier, by far, but that’s still only half way there. I would go for a strengthening of the banking system. Close the weak banks and impose serious capital requirements on the strong ones. Leave currency convertibility where it is. It’s an extremely dangerous world out there. The risks of getting caught in the pinball game are too high. But what I’m not clear on is the Budget and the macro position. I don’t know enough about these to make any specific comment.

You made the point about closing down weak banks. But in India, the social costs of this move could be disastrous…

You see, it may sound hard-hearted, but you cannot keep unsound financial institutions operating simply because they provide jobs. There can be a huge amount of damage a bad bank can create. There is a cruelty to our market system, but that cruelty cannot be eliminated. The alternative is fraught with danger, that of carrying on with the weak banks.

How do you think India has fared against the background of the Asian turmoil. Why, if at all, is the situation here not that bad?

India has avoided the worst. The answer is partly in the fact that the restrictions discouraged both inflows and outflows of short-term capital. The answer can also be attributed to the fact that India did not become flavour of the month too soon, or too long ahead of the crisis and was a relatively late entrant. For instance, among the troubled Asian economies, the ones which have been saved are the late entrants like the Phillippines.

p>Krugman gently points out the dark cloud on the silver lining of India escaping the East Asian turmoil… Namely, much of India’s insulation could simply be attributed to the fact that the amount of accessible capital per individual in India was pretty low to begin with - particularly in the 1990s. By contrast, the argument goes, the other South East Asian economies had more capital flowing in than ability to productively absorb it (thus introducing local asset bubble distortions as it flowed in and later flowed out… sound familiar?

) With India, by contrast, most folks argue that the real problem is the reverse (and who knows, perhaps microfinance could plug some of the gap)

Personally, although I disagree with many of Krugman’s political pieces (and alas, practically since W took office, a substantial chunk of Krugman’s writing has been predictably & fiercely partisan), I do actually agree with a lot of his underlying economics writ large. I forget who said it, but it’s been pointed out that while the differences between economists gets a lot of airplay, the surprising amount of material where economists of most stripes agree rarely gets the same attention. And many of these have a rather direct bearing on both domestic policy within and US policy towards India –

There are lots of good reasons to be annoyed with Paul Krugman. (Like here, here, and here). But as a cock-eyed optimist, I’m very happy to have him around. Think about it: The world’s most famous left-wing economist:

3. Identifies anti-globalization activists as the enemies of the world’s poor. (The Accidental Theorist, Part 3)

4. Titles an essay “In Praise of Cheap Labor: Bad Jobs at Bad Wages Are Better than No Jobs at All” (The Accidental Theorist, Part 3)

5. Points out that if you oppose Big Government, you should favor cutting Social Security, Medicare, and other popular programs. (“The Lost Fig Leaf”) Sure, he’s hoping to scare us away from libertarian rhetoric, but there’s no use running away from the truth.

With election season being what it is, I doubt you’ll see any of these points surfacing on his fav candidate’s website but it’s nice to know Krugman does ultimately advocate them.

39 thoughts on “Krugman on India”