When we first blogged about the differences between McCain and Obama on Pakistan, we had no idea that this issue would grow to be a central issue in the debates. What’s funny about it is how it leads the candidate of each party to sound very much like he belongs to the other side. 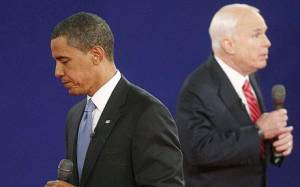 p>Doesn’t Obama sound like a Republican, with his insistence that US national security should take a precedence over the sovereignity of other countries?

And if we have Osama bin Laden in our sights and the Pakistani government is unable or unwilling to take them out, then I think that we have to act and we will take them out. We will kill bin Laden; we will crush Al Qaeda. That has to be our biggest national security priority. [Link]

p>McCain, in his objection, is forced to sound like a Democrat, talking about soft power and how American arrogance can lead to more support for terrorism:

You know, if you are a country and you’re trying to gain the support of another country, then you want to do everything you can that they would act in a cooperative fashion. When you announce that you’re going to launch an attack into another country, it’s pretty obvious that you have the effect that it had in Pakistan: It turns public opinion against us. [Link]

p>No wonder Palin got confused which position she was supposed to support:

“So we do cross border, like from Afghanistan to Pakistan you think?,” Rovito asked. “If that’s what we have to do stop the terrorists from coming any further in, absolutely, we should,” Palin responded [Link]

What I don’t understand is why nobody has brought up the fact that events have overtaken both candidates. They’re acting like there is a debate over whether to respect Pakistani sovereignty when the US already regularly violates Pakistani airspace and has sent special forces in on the ground:

President Bush …okayed the use of U.S. ground assaults in Pakistan two months ago to hunt Taliban and Al Qaeda, including Osama Bin Laden, who is believed to be hiding out in the outlaw border region. [Link]

U.S. violations of Pakistani sovereignty have become routine. The most commonly employed tactic relies on missile-firing drones to patrol Pakistani airspace and attack suspected al-Qaida or Taliban militants. Yet there is also evidence of a growing willingness to put boots on the ground. On Sept. 3, in a widely reported incident, U.S. special operations troops raided a village in South Waziristan, leaving a dozen or more Pakistanis dead. [Link]

The candidates continue with their positions frozen at some point over the summer, with neither one of them raising this change in tactics, and the moderators ignoring it as well. This conspiracy of silence is quite bizarre.

When will somebody ask them what they think of current US policy in Pakistan, and whether these incursions are helping or hurting America’s GWOT? In particular, this question should be posed pointedly at McCain who has said that announcing that being open about a policy of cross-border attacks will undermine popular support in Pakistan and lead to a worse outcome. Senator McCain, is that what you see happening right now?