After the Asian American caucus meeting on Wednesday morning I had the chance to speak with Democratic superdelegate-at-large Kamil Hasan (appointed by Howard Dean). Hasan is an entrepreneur from the Bay Area and a partner at HiTek Ventures. He is also a member of the IndoAmerican Council whose mission is as follows: 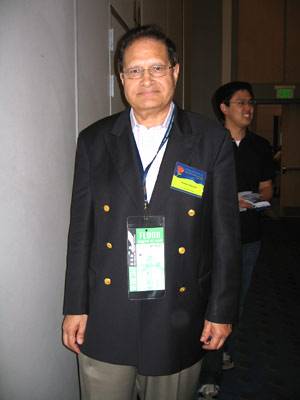 iForum is a non-partisan organization with a mission to:

1. Empower the Indo-American community to be more active in public service so that it can influence the future strategic direction of our country and major policies of our government.

2. Inspire and mentor aspiring young Indo-Americans to get involved in public service and run for office, and to provide them material and strategic support to ensure their success.

3. Identify and prioritize issues of major importance to the Indo-American community, develop white papers on these issues, and develop a mechanism to address them.

4. Create a forum for exchange of ideas between the community, elected officials and influential leaders on issues important to the community. [Link]

Hasan warmed to me when I told him that I grew up in the Bay Area. Ravi and I (and several journalists here reporting for Indian newspapers) have found that the South Asian American finance folks (the top fundraisers) are pretty tightly controlled and so the press (when acting in an official capacity) is kept at arms length from them. Mr. Hasan however, was kind enough to speak with me.

Hasan raised a lot of cash for Kerry back in 2004 as a top bundler. His wife also hosted fundraisers for Hillary Clinton in their Bay Area home (with Bill in tow). Then, on June 1st of this year with Clinton’s fate sealed, Barack Obama called him up for his delegate vote. Mr. Hasan told me that he spoke to Obama for a few moments to make sure he supported the Indo-U.S. nuclear deal and a few other issues of importance, especially to Indian Americans of his generation. Since then Hasan has been a top bundler for Obama, in fact, he was the one that organized and hosted the “I’m a desi” event in San Francisco a few weeks ago. We both found a lot of humor in Obama’s comments about making dal. My last question to Hasan was if he had any children and if they were as in to politics as him. Hasan has two daughters. One is an attorney in the bay area and the other is still in school as a poli-sci major. The younger one was already raising funds for California state level candidates when she was just 19. Seems like we have a dynasty in the making here.

Hasan represents the archetype of the “rich uncle” in Indian American politics (and I don’t mean that as a pejorative here). He knows what his issues are and is in a financial position to advocate vigorously for those issues. I’ve seen a lot of folks here, 2nd generation unlike Hasan, who will “be” Hasan in just a few more years. I think it is important that those young financiers allow themselves to be more vocal about what exactly their issues are, just like Hasan was.

Ravi and I, political outsiders that we are, have come to understand just what a central role money plays in politics. It is even more central when you come from a minority group as small as South Asians in America. Unless you show that you come with “resources” you don’t get access to power. I’ve been wondering to myself over the last few days if being in the thick of things makes you confuse the means with the end. Its hard not to get caught up in this world of luncheons, handshakes and bundling.

27 thoughts on “DNC Day 3: The Superdelegate and Money Man”