Well, the laws of probability had to eventually come to fruition, and for one night of the convention, I decided to have an “alternate night.” I headed to the Ralph Nader “Open the Debates” rally at U of D, which was quite the spectacle. It was at times entertaining, frustrating, bizarre, and exciting. It cost 12 dollars to enter, which was somewhere between a few thousand dollars and a few hundred thousand less than it takes to get in the DNC. I was on the prowl for South Asians, though it seemed that by the time I had arrived most people had already settled in their seats (Nader rallies are not for those with short attention spans, and they are more like performances as opposed to the â€˜meetingâ€™ feeling of a convention). 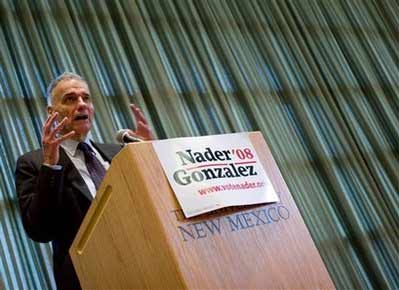 I was able to catch a glimpse of Ralph at the start of the convention, which was a good thing seeing as though some uncontrollable circumstances prevented me from seeing his final speech. Unlike the DNC or RNC, time management was not in high demand at the rally. I did, however, see Cindy Sheehan, the MC, and the former lead singer of the Dead Kennedys give speeches generally trashing both parties for their many “similarities.” On a slightly more substantive note, Bob Barr and Cynthia McKinney sent taped videos offering their critiques of the establishment and their arguments for opening the Presidential Debates to 3rd party candidates, which was the stated purpose of the rally.

I met one South Asian vendor, Nick Bygon, who was selling black Ralph Nader â€œrebelâ€ t-shirts in the mold of Obamaâ€™s white â€œhopeâ€ t-shirts. Bygon, a student at community college, told me he supports Nader because he believes in a cause â€œgreater than himself,â€ and that thereâ€™s little difference between the two major parties. He cited the example of Afghanistan, saying that Obamaâ€™s pledge to increase troop levels showed that he really was no different than McCain when it came to â€œwarmongering.â€ When asked about the accusation that Nader stole voters from Obama, he replied that Nader supporters would never have voted for Obama or McCain. (He might be interested in this article). He said he first supported Nader in 2000 and has been a major fan ever since.

Cindy Sheehan spoke about the war, Jello Biafra spoke about torture, and Sean Penn gave a highly convoluted and confused speech about terrorism. There were some really weird musicians and some generally bizarre protesters. The impression and general feeling of the audience was: donâ€™t tell Ralph not to run! The two major parties are the exact same! Anyone who truly believes the two parties are the same, has obviously not looked at recent Supreme Court appointees, the candidates’ plans for Iraq, their tax plans, and their healthcare plans. And while I was on the prowl for South Asians, and maybe I was just looking in the wrong sections of the crowd, I have a theory about why there might not be a large amount of South Asian Nader supporters. The extremely diverse group of people attending Nader rallies gushes at the prospect of socialism, single-payer healthcare, high taxes, and increased government. They are shining idealists, fighting for a socialist ideal they have never experienced in the very free and capitalist state of the United States. Many South Asian immigrants, on the other hand, have experienced the full brunt of government socialism, spending, and ambitious programs (see India up to ’91) in their countries of origin, and are thus wary of unbridled government expansion. They have found that good old balanced and centrist economic pragmatism works, whether here or there, and hey â€“ this guy says his whole theory of economics is â€œpragmatism.â€