Thanks to the kindness of a few very nice people, I was able to go to the convention for the Kennedy and Obama night, and I would be remiss if I did not give at least a short comment on both. Caroline Kennedy’s tribute as well as the video ably paid justice to a man who has done a great deal to benefit all Americans, especially in many cases immigrants. The issues of immigration reform and immigrant rights, healthcare, discrimination, poverty, and an intelligent foreign policy were all discussed in great detail at the many Asian American events today, and Ted Kennedy has certainly done a great deal of work on all of these issues in his extensive time in the Senate. When he said he wanted to “close the book on the old politics of race and gender, group against group..,” I thought he would certainly be encouraged by the bonds forged by the many different ethnicities in the AAPI caucus, which showed itself today to be formidable and only growing stronger and more cohesive in the near future. 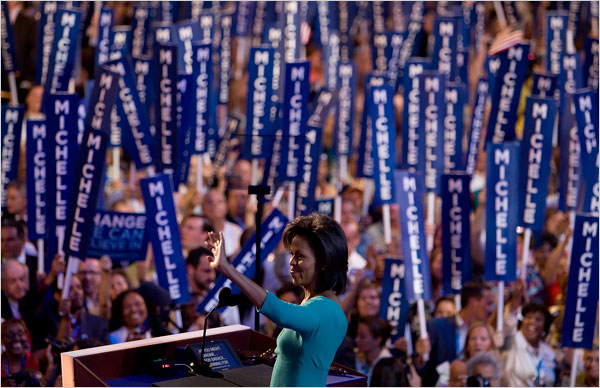 Michelle Obama’s speech probably brought the most enthusiastic response from the crowd, and it had a lot of messages that had the potential to resonate with the South Asian community. Craig Robinson introduced her as a devoted and caring mother and the Obama and Robinson extended family as one that has a strong emphasis on bonds and family values, a theme of extended connection that is common and cherished in South Asian communities. She discussed how her parents taught her that “America should be a place where you can make it if you try,” the idea of the American dream that certainly is powerful for all immigrants. Her major theme was that her and Barack see the “world as it is and the world as it should be,” and only accept the “world as it should be.” Whether you will vote for him or not, the fact that, as Michelle said, “a son of a single mother from Hawaii can go all the way to the White House” has to be encouraging to any proud immigrant parents or children of immigrants.