This afternoon I had the pleasure of seeing everyone I saw at the AAPI Caucus, and a few more, at the AAA-Fund “Power Hour” and the IALI Reception. In case you are wondering what these lovely acronyms mean, AAA is the Asian-American Action Fund and IALI is the Indian American Leadership Initiative, both 501(c)3′s that support Asian-American (in IALI’s case, Indian-American) Democratic candidates, as well as a few candidates that are special supporters of these communities. 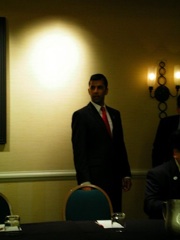 The AAA Fund event brought together a great collection of Asian-American leaders and activists, led by the omnipresent and eternally cool Congressman Mike Honda. Honda remarked how he was the first recipient of AAA funds, and how this meeting was far larger (double the size) then it was four years ago. He gave a great introduction to our very own Ashwin Madhia, who gave his campaign pitch, got a standing ovation from our group, and also mentioned (a few times) that his campaign is in the homestretch and needs another million dollars to run strong through the fall. We also heard from numerous other leaders, including California folk hero comptroller John Chiang and whiz kid Sid Salvi. We heard about the AAA’s ambitious AAPI Vote Project, which has substantial resources and a well-documented plan.

At the IALI reception, many more Indians appeared on the scene (obviously), though many of the same faces were still present. Madhia and Honda made appearances, and media from seemingly every Indian TV station imaginable was covering the event. The big news at this event were the appearances by majority whip Steny Hoyer and former vice-presidential contender (and current Virginia governor) Tim Kaine. Their appearance highlighted the rapid ascendancy of Indian-Americans in politics, and most importantly, Tim Kaine noted that he had 3 Indian-Americans in his 10 person cabinet this past year, and they all did an exceptional job, showing that South Asians are rising politically not due solely to wealth, but due to qualifications and will.