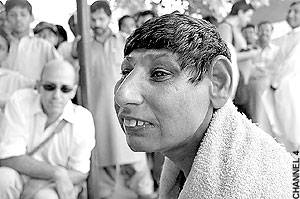 Outside a Muslim shrine in this dusty Pakistani city, a “rat woman” with a tiny head sits on a filthy mattress and takes money from worshippers who cling to an ancient fertility rite.

Nadia, 25, is one of hundreds of young microcephalics — people born with small skulls and protruding noses and ears because of a genetic mutation — who can be found on the streets of Gujrat, in central Punjab province.

…According to local legend, infertile women who pray at Shah Daula’s shrine will be granted children, but at a terrible price. The first child will be born microcephalic and must be given to the shrine, or else any further children will have the same deformity.

…”The myth of the chuhas [rat people] has been exploited by beggar mafias and religious groups,” said Nasiruddaula, a former science professor in his 70s.

“They roam the villages and if the real chuha is born they give them some money and they take them,” he said.

The high incidence of microcephalics in Gujrat, an industrial city of around one million people, has long been a bone of contention. 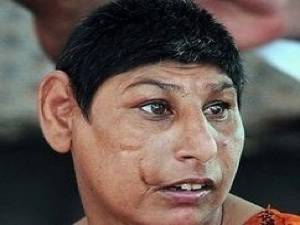 The popular belief among many Pakistanis — that cruel beggar gangs clamp the children’s heads in infancy — is strongly denied by government and advocacy groups, who say there is no evidence to support this.

Recent medical studies say the most likely cause is that the normally rare recessive genes behind many microcephaly cases crop up with greater frequency because of the common custom of marrying cousins in Pakistan.

Due to unique historical circumstances, a small spurt of microcephaly landed in the UK as reported by the Telegraph –

In 1967, Pakistan dammed the Jhelum River that forms the frontier between Punjab and Kashmir. The resulting reservoir displaced thousands of peasants who were farming the river’s flood plains. They emigrated: some went as far as Bradford and Leeds, where they formed the nucleus of one of Britain’s largest Asian communities.

And from that kernel, more rigorous scientific investigation and tests to screen for the abnormality enabled benefits to flow back to the homeland –

…In Pakistan, however, some 60 per cent of marriages are between first cousins; the frequency in Bradford and Leeds is thought to be comparable. The result is that clinical genetics units serving the British Pakistani community see a range and frequency of genetic disorders unknown elsewhere in the country.

…Microcephaly cannot be cured. But it can now be prevented. Now that some of the mutations have been found, parents from families with a history of the disorder can have their newly conceived embryos tested. If the embryo has two copies of the mutation, it can be aborted.

…In Lahore, I met a middle-class family with two microcephalic children. Their mother, a woman who loved her disabled children passionately, spoke of her joy when just such a genetic test – the first in Pakistan – enabled her to give birth to a healthy girl.

The Telegraph article also goes into the insights into human brain evolution that genetic “quirks” like microcephaly (tragically) provide a sliver of insight into. Fascinating stuff.

41 thoughts on “The Rat People”