This weekend marks the twenty-fifth anniversary of war in Sri Lanka, which is commonly dated to the anti-Tamil riots there in 1983â€”a time now known as Black July. The immediate catalyst for the violence: the death of 13 Sinhalese soldiers at the hands of Tamil militants. The longer story: ethnic tension that had simmered for decades, under British colonial rule and beyond. 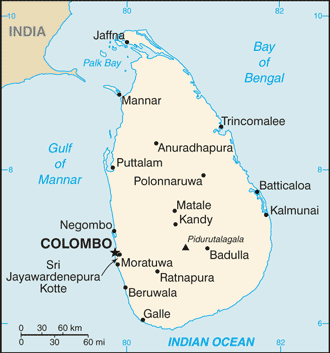 On the 24th of July, rioting began as news spread about the deaths of the soldiers. The government was obviously complicit in the pogroms. (This link is to a Sri Lankan government website.) People with voter lists directed the mobs to the homes and properties of Tamils, which they destroyed. Thugs stopped vehicles on the streets, and, ascertaining the Tamil identities of the people within, set them aflame. When the violence finally ended, days later, as many as three thousand Tamils had been killed. Thousands and thousands more were left homeless. Shortly after, Sri Lanka saw a flood of Tamil emigration.

The 25th anniversary of such a hellish hour in the countryâ€™s history should not pass unnoticed on the Mutiny. Sri Lanka is Mutinous; itâ€™s Mutinous in all the wrong ways: fostering ethnic hatred, distrust, violence, censorship, betrayal, and rootlessness in its own people. And itâ€™s Mutinous in all the right ones: Sri Lanka and its diasporas are full of people who resist easy definition and boundaries, who refuse to cede to what they believe to be wrong, and who still fight, after twenty-five years, for a just home in the most beautiful place on earth. This is not a country that can be seen in black and white. This is a country in which authorities helped Sinhalese civilians to attack their Tamil neighbors. And this also is a country in which the people who saw that what was happening was wrong took their Tamil countrymen in and tried to protect them from the chaos. The best of human nature beginning a long battle against the worst of human nature.

p>Of course, much has happened in the 25 years since. In the wake of the riots, the Tamil Tigers and comparable groups found more willing and able recruits among young people who were no longer sure what their future was in Sri Lanka. The Tigers launched more military-style actions against the governmentâ€”but they also engaged in attacks on civilians, elected politicians, and dissidents. Now other minority populations and factions (including Muslims and tea estate Tamils) struggle for purchase on the shifting ground of war. Tamil journalists and civilians disappear in government-controlled areas as bombs go off in urban centers and near politicians. Civilians on the ground pay the price of this conflict, and to what extent, I cannot sayâ€”as their voices (Sinhalese, Tamil, Muslim, Burgherâ€¦) go largely unheard, and the voices at either end of this argument often drown out those in the middle.

p>I am not a spokesperson, and I am not a historian. Even if I were, capturing those 25 years in a blog post would be a thankless task. But I am an artist, and as an artist I am against war. So I wanted to tell the Mutiny that I will take a moment of silence this weekend for those who suffered in 1983, and those who have suffered since. This is a moment of silence that I choose, and that no one can impose upon me.

p>I will leave you with links to other reading.

p>One, a poem by Indran Amirthanayagam that I like particularly because of its ending on a note of goodness and hope. (More Groundviews coverage of the anniversary here.)

p>The other, a piece I wrote in a recent Washington Post, about finding myself in the tough position of trying to articulate Sri Lankan issues and history.

p>Finally, a couple of pieces of miscellany: The BBC on the 25th anniversary and a report about the Sri Lankan government asking other countries to make sure Tiger “front groups” don’t hold Black July commemorations. Also: UTHR(J) (University Teachers for Human Rightsâ€”Jaffna) from their book The Broken Palymra on Black July.

UPDATE: Pass the Roti on “Six Days in July.”