When I travel to a new country, my eyes are always peeled for a desi sighting. My recent trip to Brazil was no different. This is the second BRIC nation I’ve visited (with Russia and China left to go) and having heard about Indian Oil Corp., Hindustan Petroleum, and Bharat Petroleum joint venture earlier this year to start ethanol production in Brazil, I thought I might spot other signs of investment. At the very least, I figured I would come across a Sindhi shopowner (the joke goes that even if you travel to the moon, you will meet a member of the diasporadic community of Indian traders, of which my family is a part).

But, there weren’t any Sindhis or Indians to speak of in Brazil. At least, we didn’t see any. (Well, there was one uncle type we ran into near the Ipanema farmer’s market, but he turned out to be a Mallu from New York, visiting his Brazilian wife’s family!) 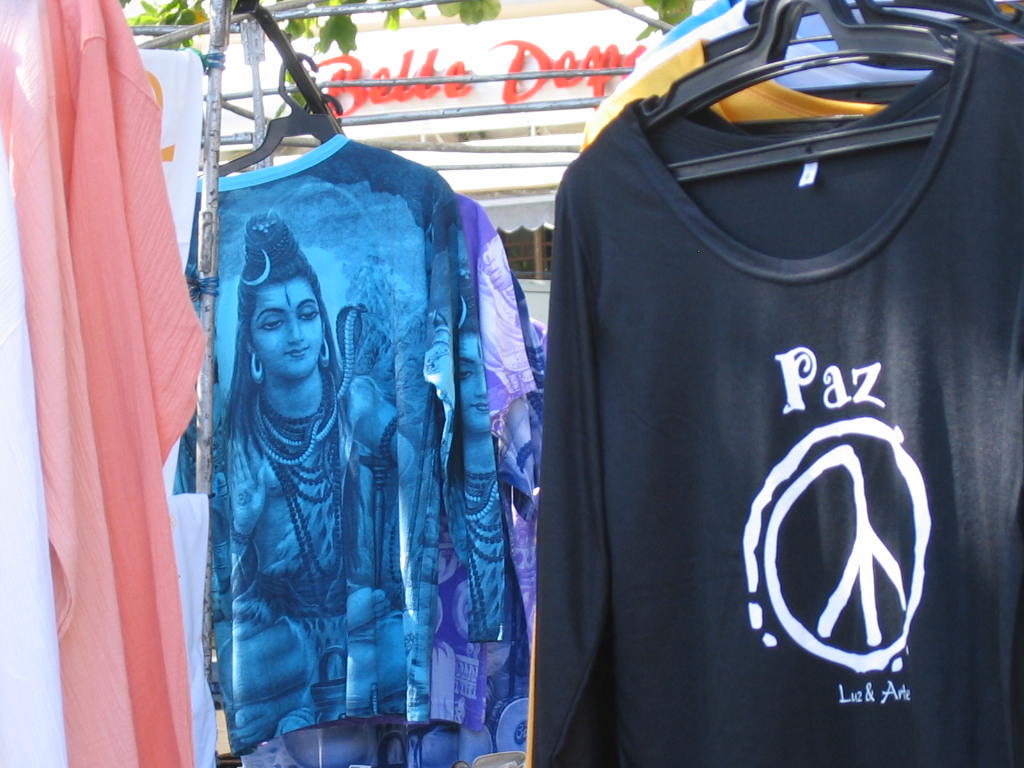 We’d heard about Nataraj, the only Indian-run restaurant in Rio. It’s in Leblon, Rio’s most trendy residential neighborhood, and I figured we’d find a desi there. “It’s no good,” our New York uncle friend told us while he helped us shop for figs and sitaphal. “Don’t bother going.”

So we didn’t. (Now that I’m home, however, some scoping did yield a little write-up about Indian restaurants in South America here which pointed out that the restaurant is run by a family whose matriarch used to work for the British High Commission in Rio. “She had been doing special event catering for the embassy as a side interest and then one fine day she decided to open a restaurant – I’m glad she did. It takes courage to make a caipirinha with an indian twist.”

Dang. Missed opportunity for a good Sepia post. Next time I go to Rio, I’ll have to make it a point to go here.

So, Brazil is home to a multitude of skin colors, so it’s easy to mistake Brazilians for Indians and Indians for Brazilians, so much so that many times, people mistook me and my husband for Brazilians and spoke to us in Portugese. There were, however, a few exceptions.

In Salvador de Bahia, the northern city which was the first capital of Brazil, from 1549 to 1763, a photojournalist came up to us during the 2nd of July Independence Day celebrations. “Are you Indian?” he asked. “Yes,” we answered. “Can I take a picture of you? First time I’m seeing Indians in Salvador,” he said.

Wow. I felt like an intrepid explorer, though I was quite certain I couldn’t be the first Indian in Salvador.

I was proven right. Later that day, in Salvador, we were at Rafael Cine Foto in Pelhorino, trying to get our camera repaired–and ahem, negotiating for a better price–when the shopkeeper (whose English was limited) asked us, laughing, “Are you Indian?” (I guess we carry our reputation as bargain makers around with us, wherever we go!) Later, my mother mentioned that her once-in-a-while Brazilian cleaning lady told her that there are lots of Indians who own shops at the malls in Salvador. I guess I should have gone to the mall!

Despite my lack of desi human spottings, there was no dearth of Indian influence–mostly of the exotic India variety–to be found in Brazil. [A brief photo essay follows below the fold.] On prominent display at a bookstore in Ipanema, Mira Kamdar’s Planet India. Perhaps the pending free trade agreement in India has a lot of Brazilian investors thinking? 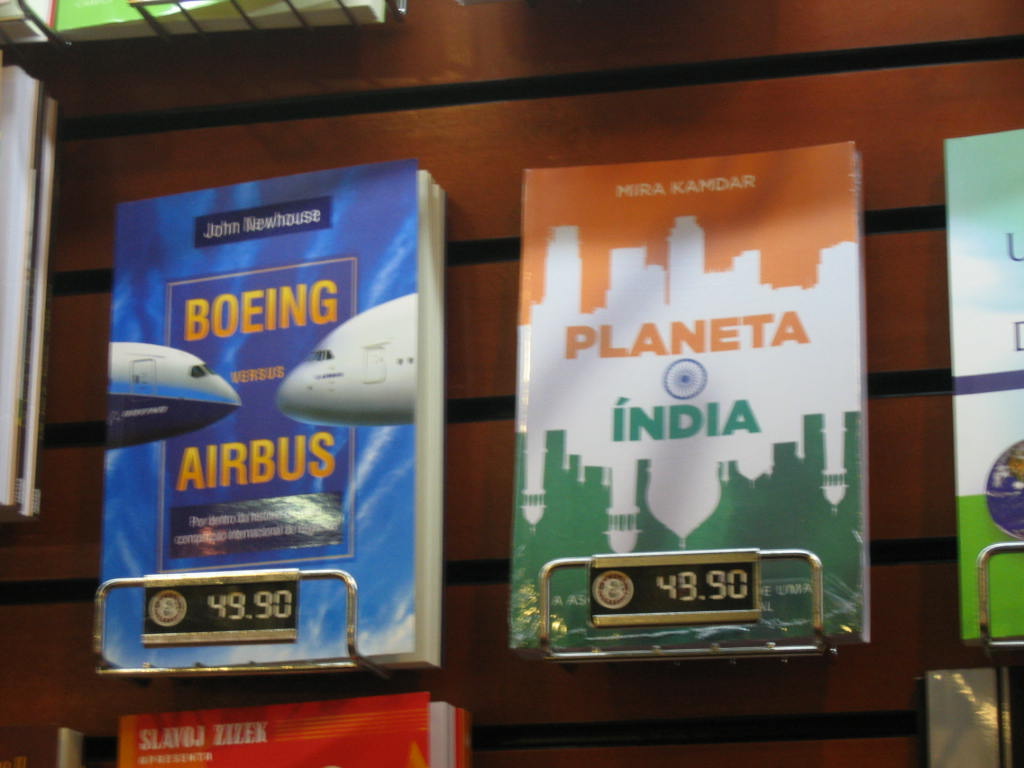 At Cafe Felice, a great lunch spot and gelataria near Ipanema beach, this guava lassi (they also had mango)– complete with a very authentic spice mix (like a chaat masala) sprinkled on top. You barely get that here in New York. 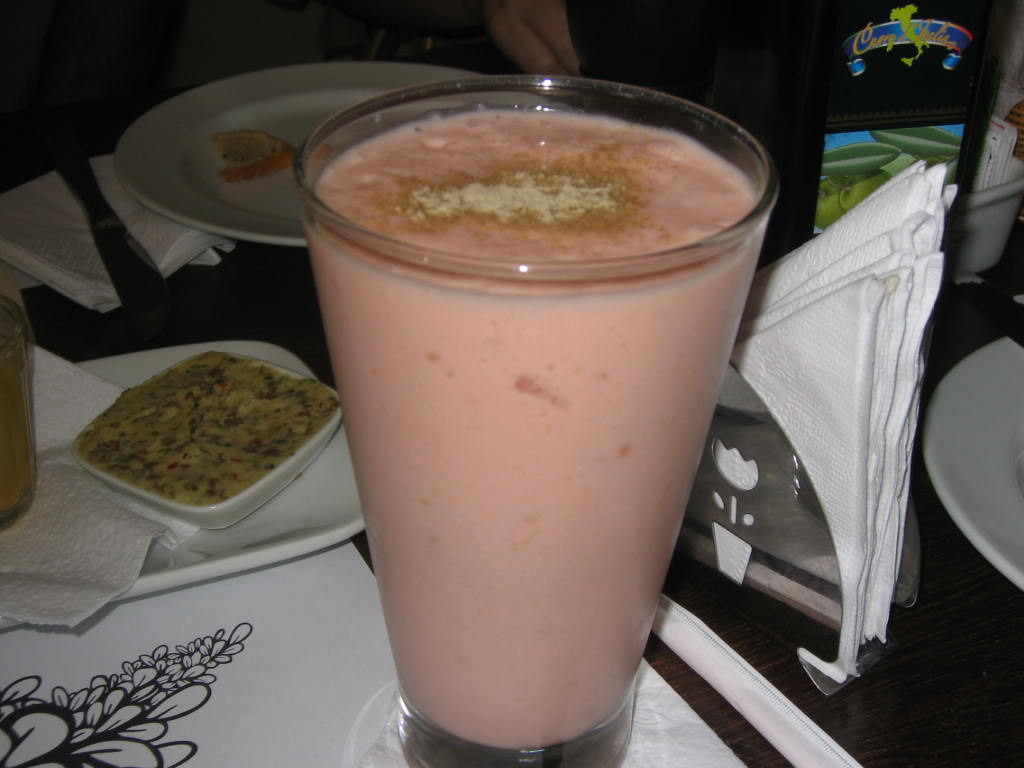 Brazilians love to shop. In Barra, a sprawling residential neighborhood on the outskirts of Rio, there’s a huge mall that could probably compete with the Mall of America in terms of size. It’s called New York City Center, no kidding, and comes complete with its own Statue of Liberty. 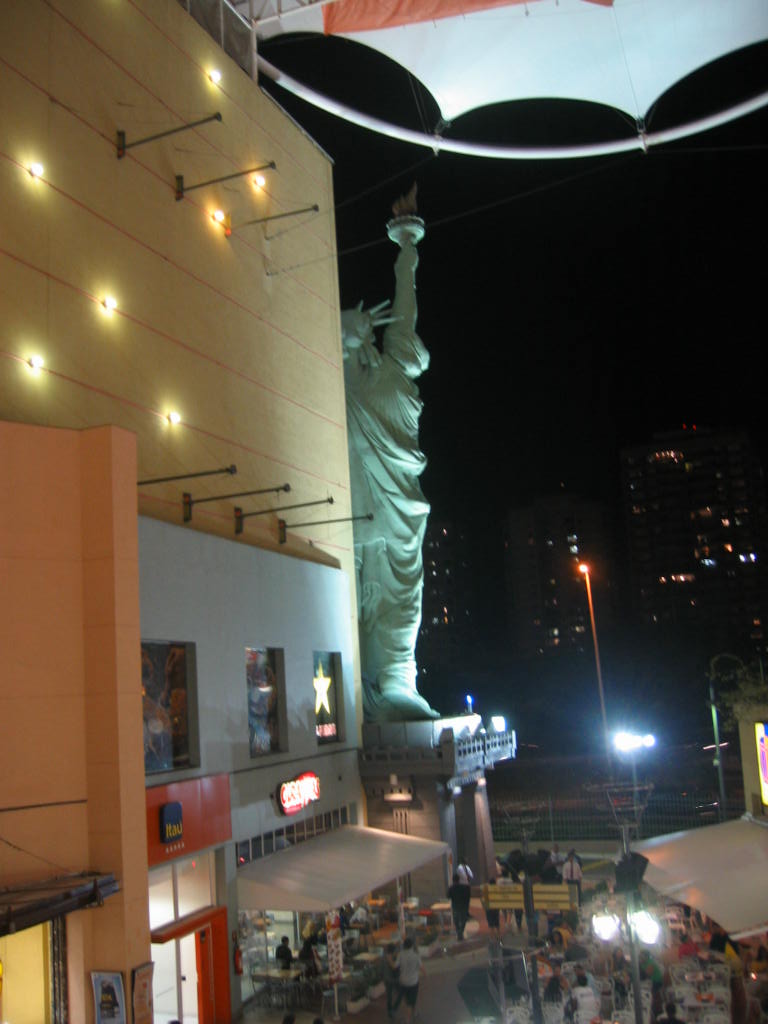 There were no Indians at this mall, But, inside was this stall, Tantra, bursting with incense, statues, and other decorative Indian fare. I checked; it wasn’t run or owned by a desi. 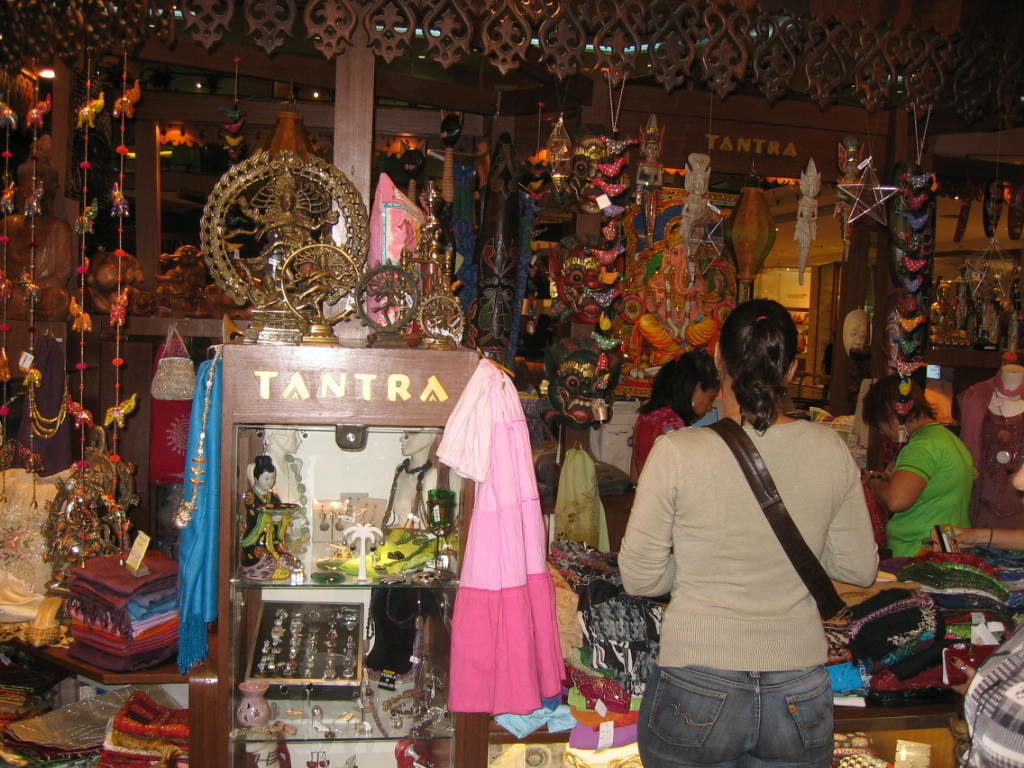 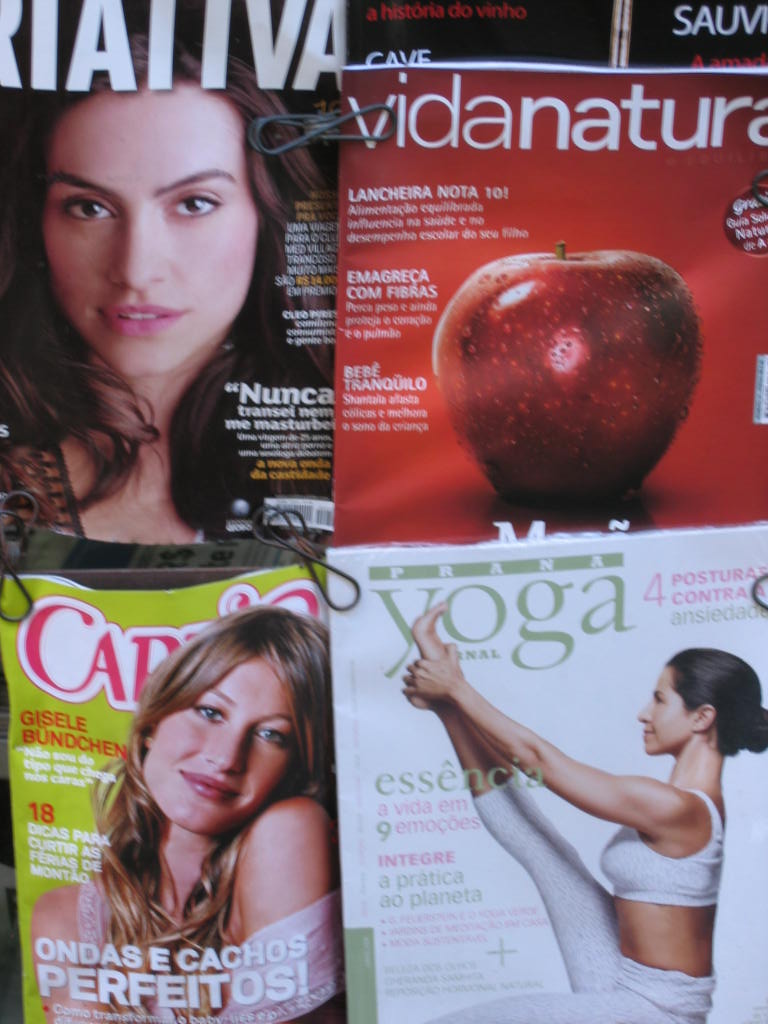 The “Father of the Nation” has a tangible presence in downtown Rio at the Praca Mahatma Gandhi. The statue there, adjacent to Cinelandia, Rio’s landmark cinema, was donated by India in 1964. [some great pics here.] In the historical Pelhourino section of Salvador, this “Gandhy” bag with a cute little illustration caught my eye. The bag was passed around during Carnaval and commemorates 59 years of peace. The man spoke no English so I couldn’t decipher anymore. 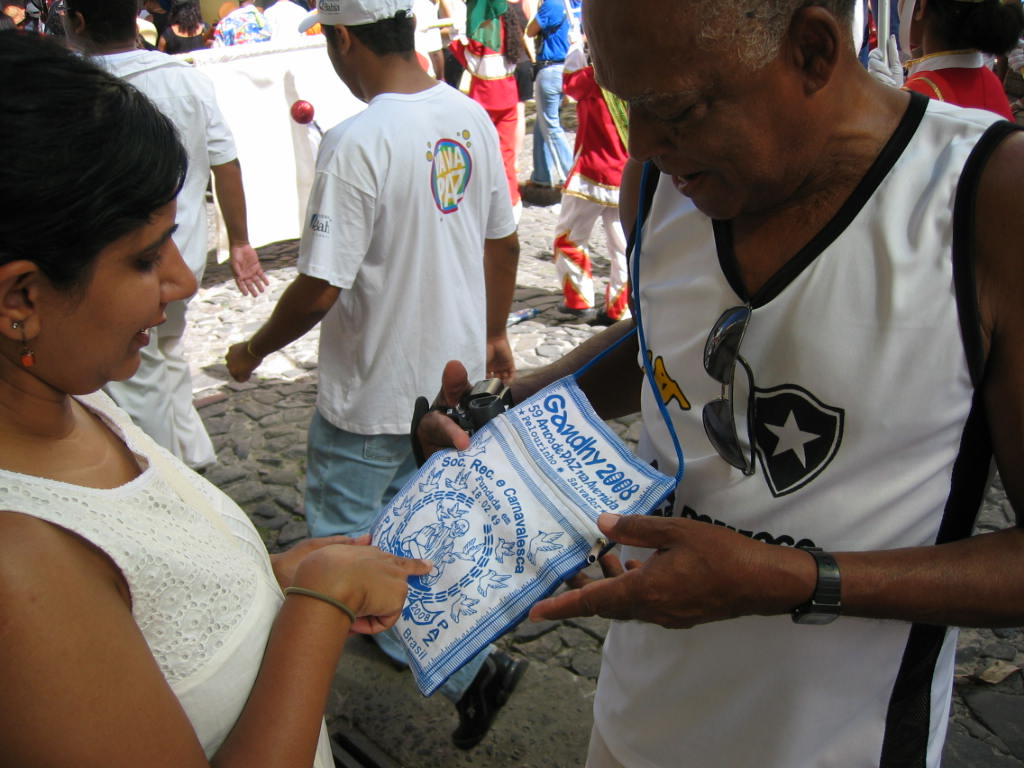 And, finally, I saw this guy at an evening service in a church in Salvador wearing a Shiva tee-shirt. 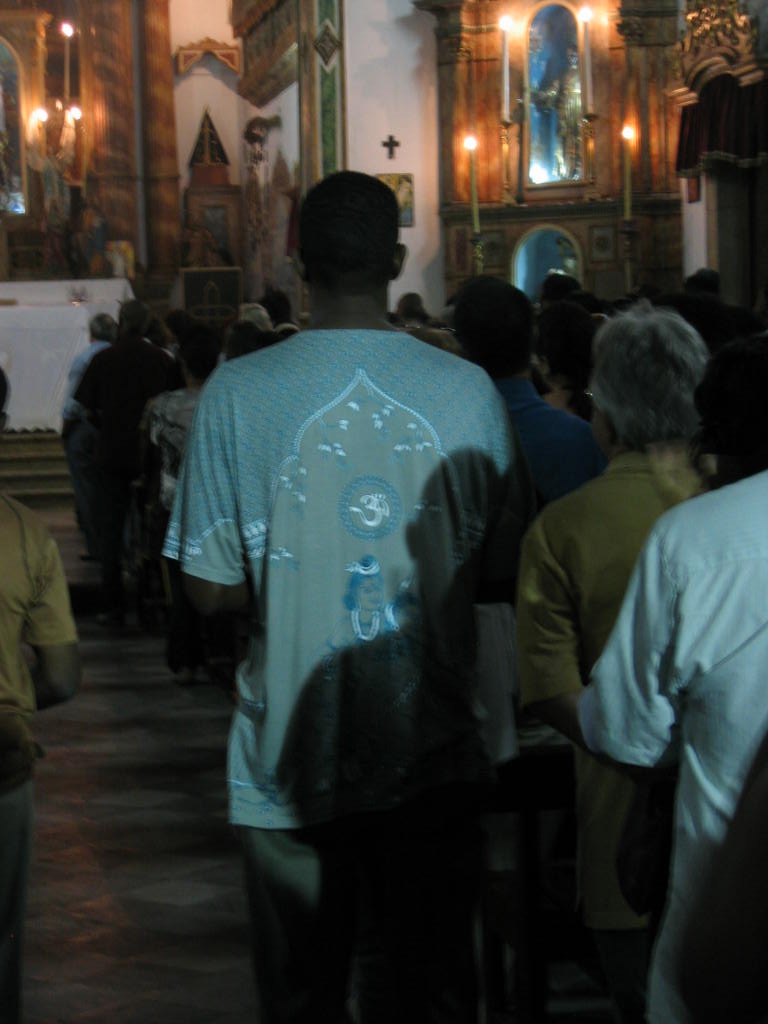 He probably picked it up at this tee-shirt stall at Rio’s famous Sunday hippie market. (Every city in Brazil has one of these fairs which actually began in the 60s.) 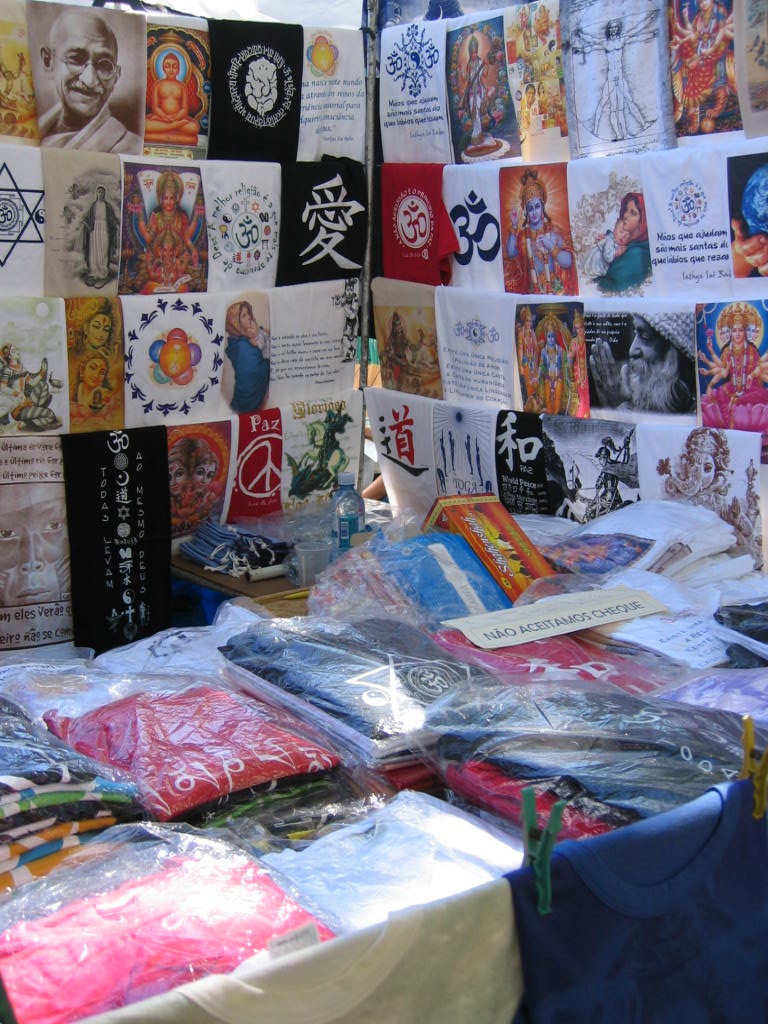 116 thoughts on “Desi Spotting in Brazil”