Last night, the interwebs were all abuzz with news of the most recent New Yorker cover. Generally, left-wing bloggers appear pretty outraged: 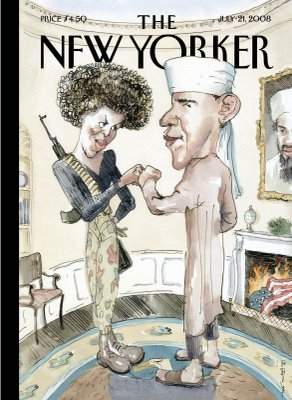 There’s no other ulterior motive to publish cartoons like this right? …This is disgusting. Might be worth canceling a subscription or two. [Daily Kos]

… so singularly out of touch … It may not be unusual for Upper East-Side liberals that a half-black man with an African father and Hussein for a middle name … might ascend to the presidency, but to some Americans IT IS EVERYTHING. [TPM]

While I was alarmed at first, the image grew on me as satire. It’s a veritable Where’s Waldo compendium of right-wing fears about the Obama candidacy:

As I see it, the cartoon intends to show just how absurd people’s fears are: fears of foreigners as fifth columnists, fears that men who wear turbans (even if once, for a foreign photo-op) must be Muslims, and therefore unpatriotic. The cartoon makes these images concrete and then laughs at them, like a riddikulus spell against a boggart.

This approach is one I take with kids, who are both fascinated and afraid of me. When a five year old whispers loudly to his mother “Hey look Ma! A genie!” I turn around and offer the kid three wishes. This confuses them because they know that genies aren’t real, and it breaks through the wall between us. When 10 year olds say to each other “look out, he’s got a bomb!” I look at them and go “Boom!” More often than not, they laugh in response.

The problem is, it doesn’t work with grown-ups, who generally take themselves far more seriously then kids do. The kinds of people who have these fears are also generally deaf to irony.

I don’t think this cartoon will change people’s minds, nor do I think it’s trying to. It’s more like an episode of the Daily Show or the Colbert Report, something that mocks narrow-minded knee-jerk bigotry by pretending to take it seriously. If it makes you either squirm or laugh, it has done its job.

UPDATE Here’s the New Yorker’s explanation of what they were trying to do (thanks reader):

In a statement, The New Yorker magazine said the cartoon “combines a number of fantastical images about the Obamas and shows them for the obvious distortions they are.” The New Yorker said the cover, called “The Politics of Fear”, was a critique of unfounded allegations that have tried to portray Mr Obama, a Christian, as a closet radical Muslim. “The burning flag, the nationalist-radical and Islamic outfits, the fist-bump, the portrait on the wall? All of them echo one attack or another. Satire is part of what we do, and it is meant to bring things out into the open, to hold up a mirror to prejudice, the hateful, and the absurd. And that’s the spirit of this cover,” the statement said. [BBC]