p>As long as I’ve been on here, I’ve blogged about food. And I love hotttttt food. I always thought Amma’s cooking was spicy enough. Apparently not!

A restaurant in London is out to set the record for the world’s hottest curry. 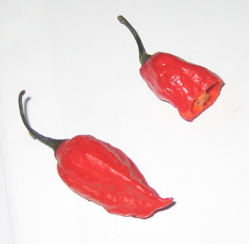 The Bollywood Burner contains the hottest chili pepper in the world: the Naga. From the story:

[It's] a lamb-based dish with a fierce kick.

The curry is so hot that diners are asked to sign a disclaimer confirming they are aware of the risks involved before daring to eat it.

The Bollywood Burner is being submitted to Guinness World Records for verification of its status as the planet’s hottest curry.

According to the story, the student who tried it first says, “”The initial taste isn’t that hot but now, a couple of minutes later, I feel a bit floaty and light-headed.” A reporter says, “At first, it tasted delicious. Then my mouth caught fire. It even made me feel dizzy.” Another reporter says it sent his heart rate racing from a resting pace to the equivalent of doing aerobic exercise. (Terrifyingly, Wikipedia says that one of the few things hotter on the Scoville scale than the Naga is standard U.S. pepper spray.)

Spice-induced pain (pleasure?) fascinates me, and it appears to draw a crowd. This isn’t the first time I’ve heard of someone having to sign a disclaimer to eat spicy food. A vegetarian friend of mine went to Hell Night at a restaurant in Boston awhile back and had to sign one before eating his noodles.

Food seems like another way we measure the strongest, the fastest, the fittest, the best. And I’ll admit that sometimes, when I tell people Sri Lankan food is spicy, I’m saying it with a bit of a dare behind my words. But why is food a test we have to pass? In recent years, I’ve tried to tone it down, mostly because it seems like my penchant for pepper could be giving me an internal third-degree. Everything in moderation, right?

That seemed to work well at a recent Sri Lankan-themed potluck held at the home of DKG, with contributions from four people. 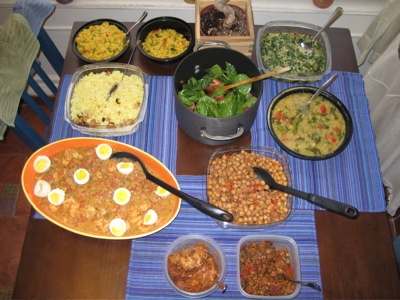 ) R, one of those in attendance, made a persuasive argument against excessive spice. Nothing we made really brought the heat Amma-styleâ€”but it was pleasantly tingly, enough so that at the end of the meal, I was happy to cut the afterburn with A’s caramel pudding (below).

What’s the hottest curry you’ve ever made or eaten? Have you ever eaten something competitively hot a la the Bollywood Burner or Hell Night? Do you judge those who can’t take the heat?

Aside: (For the record, it seems that any metabolic kick one gets from spicy food is negligible. Indeed, testing of Indian takeout in Britain seems to indicate it is worse for you than other kinds of food.)