On Tuesday, March 25th, 2008 at 4a.m. in Hollywood, CA, Mohammad Usman Chaudhry, a highly functioning autistic person, was shot multiple times and killed by the LAPD (Hollywood Division) on the 1400 block of Curson Ave. Usman was still in handcuffs when examined by the coroner. Family members of Usman were not told about his death until 21 days after the killing. [SouthAsianNetwork]

According to police, Officer Joseph Cruz and his partner were patrolling the street when they saw a dark figure by an apartment complex. The officers approached to investigate and encountered Chaudhry lying behind some bushes. As Cruz was questioning Chaudhry, he pulled out a folding knife and stabbed Cruz on the left hand. Cruz pulled out his gun and fired several rounds at Chaudhry.[LATimes] 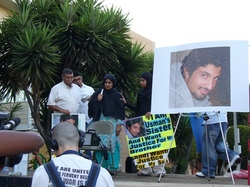 “The vigil for Usman Chaudhry was really powerful to attend on many different levels,” says Preeti Sharma, a local South Asian organizer. “Seeing the family speak out and share their anger at the police brutality, hearing the stories of other young men of color shot recently by LAPD, and lastly having people in the community feel empowered enough to give their testimony was altogether an emotional and empowering experience.”

There’s something just simply so wrong with how this story has played out. Not only was the kid only 21 years old, but he was autistic. I’m sure the autism contributed to awkwardness when he was approached by LAPD at 4am. And even if he stabbed the police with a folding knife, why shoot several rounds at a HANDCUFFED man? CopWatch also notes that the LAPD ran Usman’s ID before he was killed, as well. So basically, evidence shows that LAPD had him in custody when he was murdered. Many other people think this is an injustice too, and a blog memorial has been started in Usman’s memory. And his family and friends on it have questions as well and is heartbreaking to read…

1. Why was his family notified 21 days after his death when the officers had Usman in custody (in handcuffs) and had the chance to run his id? 2. Was his death not important because LAPD believed him to be homeless? Are homeless people not human beings? 3. Who do we call for help and trust when it is the police taking the lives of innocent people? [UsmanChaudhry21]

And there are even more questions on Usman’s brother’s blog here.

Here in Los Angeles, hearing stories about LAPD related killings are a dime a dozen, but hearing this story really rips my heart out because everything about it is so close to home. He’s the same age my sister. He might have been at the same Eid prayer I go to. He was shot by the same police department that is supposed to be protecting me. He isn’t the only youth to be killed by LAPD – in 2007 alone 13 “youth” were killed by LAPD. When will the brutality against our youth stop? What can we do to make the LAPD change their tragic ways?

86 thoughts on “Another LAPD Killing”