We’ve talked about it here before: In 1972, Idi Amin gave all 80,000 Asian Indians living in the Uganda 90 days to pack up and leave. As the BBC reported on August 7, 1972, â€œAsians, who are the backbone of the Ugandan economy, have been living in the country for more than a century. But resentment against them has been building up within Uganda’s black majority. General Amin has called the Asians “bloodsuckers” and accused them of milking the economy of its wealth.â€

A new young adult novel Child of Dandelions by Canadian author Shenaaz Nanji sheds much needed light on the upheaval of Asian Indians in Uganda. Itâ€™s worth checking out, even if you donâ€™t have a young adult in your household, or don’t normally pick up books for younger readers. 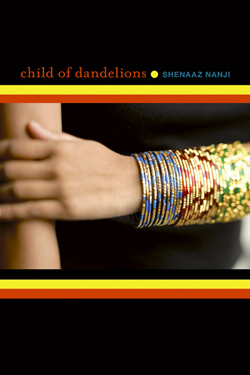 The protagonist of Child of Dandelions is fifteen year old Sabine, a girl whose comfortable life is torn asunder on August 6, 1972, the day that Idi Amin issues his expulsion order for all Indians in Uganda. Shaken by the protests she walks into while window shopping in Little India, Sabine turns to her parents for protection.

Sabineâ€™s mother is afraid and eager to leave Uganda, but her father, a wealthy Ismaeli businessman and landowner, is determined to ignore Dada Aminâ€™s orders:

â€œNonsense!â€ Papa laughed his conch-shell laugh, and her little brother echoed it. â€¦ â€œWe are even more Ugandan than the ethnic Africans. Not only were we born here, but we chose to be Ugandan citizens when other Indians remained Britishâ€¦

Sabine agrees with her father. She is different after all. Her best friend Zena is African. Theyâ€™ve grown up together like â€œtwin beans of one coffee flowerâ€ and Zena is just like her sister, even if others (like her Indian friends) donâ€™t see it that way.

Narmin â€¦Nasrin â€¦ Sabineâ€™s hands clenched at the names of her classmates. They were prissy prunes. Sheâ€™d had a big fight with them after they called Zena goli. Mixing her African and Indian friends was like mixing oil with water.

As the 90 day countdown continues, Sabineâ€™s optimism is drowned out by the growing chants of â€œMuhindi, nenda nyumbani! Indian, go home.â€ Amidst reports of violent attacks against Indian families, the mysterious disappearance of her favorite uncle, and strained relations between her and Zena (whose uncle is a general and crony of Idi Amin), she is forced to reexamine her understandings of race and class.

The novel is what Nanji calls Faction, a mix of facts and fiction. Some of the characters are real, others fictional, but every event is based on history. Nanji grew up in Mombasa, and regularly visited family in Uganda throughout her childhood. â€œIn fact the very day Idi Amin took power, I was in Kampala and to my embarrassment cheered him at a rally waving the Uganda flag, not knowing what was to follow,â€ she told me in an e-mail interview. [read the full interview here]

The bookâ€™s title comes from a powerful scene halfway through the novel when Zena tells Sabine that she can no longer associate with her because of Dada Aminâ€™s orders.

Sabine folded her arms to steady herself. â€œYouâ€™ve joined them?â€

â€œThem? Them are us. Your people have clogged up our land as the British bwanas did before. Your people, your family included, are doing magendo.â€

â€œWe donâ€™t want kindness.â€ Zena gave a short, dry laugh. â€˜You took our land and made us look after it. Now we want it back.â€

Sabine stared at Zena. But Bapa had cleared that land and cleared it to grow coffee.

â€œWe have to clear our land. The weeds must be uprooted. What can I do? You are the child of dandelions.â€

Sabine reeled as if struck by lightning. How dare Zena accuse her of being a weed?

Though Sabine is furious at Zenaâ€™s rejection, she slowly starts to see discrepancies in how Indians treat the native Ugandans. For example, she realizes that though sheâ€™s known her driver Mzee (a term of respect for all elderly gentlemen) all her life, she has never touched him before or known anything about him.

She and her family were no different from the standoffish mzungus and other Indians who distanced themselves from their African employees. Mzee had worked for Bapa at his farm for many years before he moved to the city to get an easier job and became their driver. â€¦
â€œMzee, whatâ€™s your name?â€ She looked up at him. His eyes lifted in surprise, and she saw that they were gentle and crinkled like Bapaâ€™s.
â€œMzee Kabugo,â€ he said shyly, returning his gaze downward.

As someone who grew up in Ghana, I really appreciated Nanji’s nuanced take on the complex dynamics of race and class. The expulsion of Indians from Uganda was not a black and white issue, Nanjiâ€™s story shows us. â€œEarlier versions of the story showed the military regime was wholly responsible for the crises,” Nanji told me. “Later upon reflection, I learned that no one group of people is evil. There were many factors â€“ poverty and class distinction, legacy of the colonial powers who carved up Africa like a pie, some Indians engaged in magendo, corruption, and Indians living in close-knit communities, refusing to integrate with ethnic Africans.â€

Nanji started writing her book in order to find answers to the questions her children asked her while they were growing up. â€œMy mind began to spin with questions I struggled to understand: how could an entire community that had lived for three generations suddenly be uprooted like weeds and expelled just because they were brown. Why was the rest of the world silent?â€ she said.

When she searched for books in the library on such issues, she came back empty-handed. â€œThen came the ethnic cleansing in Bosnia and the massacre in Rwanda and I knew the story had to be told,â€ she said. â€œYes, the story takes place thousands of miles away in Africa, but the emotional experience of Sabine may transfer to the American readers as part of their own reality.â€

To date, there are very few fictional works that examine the personal, social, and political turmoil caused within the Indian community by Aminâ€™s orders, so right off the bat, Child of Dandelions is a welcome addition. That it is gracefully executed and emotionally evocative makes it a book worth owning and sharing both with adults and young adults alike.