For those of us who are so wishing that the public’s fascination with arranged marriages was over, well … it’s not. Back in 2005, there was a lot of buzz [including here] around financial writer Anita Jain’s New York magazine article “Is Arranged Marriage Really Any Worse Than Craigslist?” So much so that she got a book deal out of it.

Next month, her memoir Marrying Anita: A Quest for Love in the New India will be published in the UK, US, and India by Bloomsbury. 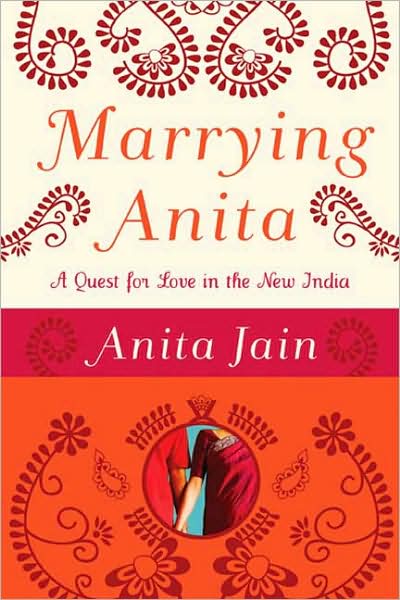 The book is being pitched as a “witty, confessional memoir” that simultaneously records Jain’s romantic quest and the story of “a country modernizing at breakneck speed.” The big question it asks: Is the new urban Indian culture in which she’s searching for a husband really all that different from America? Has globalization changed the face of arranged marriage

I want to groan, but I’m trying to be openminded and wait till I’ve actually read the book. I can’t help it though. The red flags go up in my mind when I hear about another arranged marriage book. And, now, this one combines that with another buzz word “globalization.” Is this the chick lit version of Thomas Friedman’s “The World is Flat”?

[Below the fold, glimpses of an excerpt which appeared at the Guardian last weekend.] At the Guardian is “The Marrying Kind,” an excerpt from the book. In the following section, Anita decides to move to India to find a husband.

In my three years in New York, I didn’t come close to even one romantic relationship. Dating felt like an absurd cat-and-mouse game, where people were more concerned about what they could get away with than with settling down. Despairing of another summer of Sunday brunches with the stodgy and unresponsive company of the New York Times, I knew I had to leave New York, but where could I go?
That was when I began to think of going to India. There are more men in India than women, around 930 women to every 1,000 men, according to recent census data, the discrepancy a disturbing result of infanticide and sex-segregated abortion. So I figured my options were simply more plentiful in India. In cities such as Delhi and Mumbai, the vast majority of marriages were still arranged, but I’d also heard that a culture of dating and sleeping around was gaining ground. Nonetheless, in India, a desire to be married wasn’t at loggerheads with the advances for which feminists had struggled.
People commonly go to India to find themselves or find God, but I went to find a husband. I would give myself a year, which I figured was ample time in such a marriage-oriented society. I wondered if I’d be able to find someone modern enough in his thinking to be comfortable with a wife making decisions for the household and having a full life outside the marriage – one that included going out with friends, drinking and smoking. A woman who has had sex in the past – and not just with long-term boyfriends.

So, how, the Guardian editors ask in the story’s head, “Would Delhi men cope with a Harvard-educated working woman? And what happened when her father placed an advert seeking a ‘broad-minded groom’?”

Anita’s dad, we discover, apparently has too-high expectations of sealing the deal during his six-week trip to India. His optimistism yields to a trickle of responses which are followed by disappointing in-person meetings. At an encounter with a corporate lawyer, the following ensues:

My father wants to see if there is more to the fellow. He believes only one question is required to take the measure of a man. Leaning in, he carefully chooses his words in Hindi: “If my daughter Anita is sick and cannot cook, who would cook dinner?”
Waving his hand as if shooing away a fly, Vinod answers, “I have a maid.”
Knowing how decisive the question is, Papa gives him another chance. “The maid is sick. Who cooks?”
“I have two maids,” he says, notching up his attitude of arrogant dismissiveness.
“Your other maid is sick, too. Who cooks?” my father says, relentlessly.
“I’d hire a third,” Vinod says, unblinkingly.
Neither is backing down. It is a face-off. “Forget the bloody maids! What do you do?” Papa bellows.

Gulp, at the end of all these examples, wouldn’t the average reader be left with the feeling that there are no broadminded men in India? Or is this just the excerpt that was chosen because it was deemed “juicy” enough to boost sales? (I know many progressive and broadminded desi men, my husband included, so am really hoping that this book is more than your stereotypical arranged marriage kahani. My copy of the book is on the way so stay tuned.)

For those in the NY area, the author will be reading with Sandeep Jauhar at the Asian American Writers Workshop on August 7. Details here.

275 thoughts on “The Arranged Marriage World … is Flat”