Is that salmonella outbreak still affecting tomatoes? Got a few that might be unsafe to eat? Well, pick ’em up and prepare to hurl them at me, cuz I thought Brick Lane was a dud.

But first, let me explain:
The movie is, of course, based on the critically acclaimed novel by Monica Ali. She of the Granta 20 under 40, Booker shortlist, and ravishing looks. No, I’m not jellus (ok, maybe a little bit), but for one reason or another, I never got around to reading the book.

Despite filmmakers ardent wishes, fans of any much-loved book want a movie to be a faithful adaptation. I praised The Namesake movie because it vividly brought the book to life, and willingly overlooked the disjointedness and odd pacing of the film.

Therefore, in the spirit of thoroughness, I picked up Ali’s book and spent the past few days hoping to crawl beneath the skin of the characters, to let their emotions wash over me, to exult in their triumphs and sob at their failures. I’m about halfway through and so far will admit that the movie does reflect the book: in both cases I struggled in vain to keep my eyes open. Well, I did manage to stay awake through the film, but the woman next to me succumbed quite rapidly to the charms of a deep, grunting, wheezing slumber.

Yes, the movie is poignant and lyrical and subtle. But just as the tension ratchets up in anticipation of a climax, the plot meanders, the intensity dissipates, and the viewer/reader slumps back into the seat.

Much like in sex, this can be very frustrating.

For anyone unfamiliar with the story, Nazneen (Tannishtha Chatterjee) grows up in a poor rural Bangladeshi family with her spirited younger sister. Soon after her mother dies, she is married to educated but much older Chanu (Satish Kaushik) and sent to London’s East End to be proper Muslim wife in the council estates off Brick Lane.

The movie dumps the entire first half of the book (including the suspicions around her mother’s death) and jumps to Nazneen’s circumscribed life in England with two assertive British-born daughters (son’s death glossed over) and a fat, foolish husband. Chanu’s the sort of colonialised naif who thinks that knowledge of Thackeray will blast him into the upper echelons of British society…or at least get him that promotion he knows he deserves. He mocks other more traditional Bangladeshis (“peasants”) in the neighborhood, while still making sure his wife is housebound and subservient enough to cut his corns for him at night. 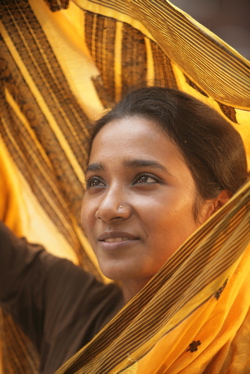 Pretty soon he quits his job (promotion never comes so he sets his intellectual phasers on get-rich-quick schemes) and Nazneen takes in sewing to supplement the family savings. Karim (Christopher Simpson) is the middleman between seamstresses and wholesaler, and his frequent delivery and pick-up visits soon lead to more. The scenes between the two are tastefully discreet, yet surprisingly steamy. Chatterjee and Simpson have great chemistry together and deliver a sari unwrapping that felt a bit like an adult christmas morning.

But this isn’t to be either. 9/11 happens on teevee, Karim discovers his militant side, Chanu feels his cuckold’s horns and decides to take the family back to Bangladesh, the daughters rebel, Nazneen ends the affair (refuses to divorce Chanu and marry Karim) but also refuses to return to Bangladesh with her husband and the film ends with mother and daughters making snow angels outiside.

Whew, sounds rather intriguing, doesn’t it? Too bad each plot line trails into nothingness. Karim grows a beard, attends meetings, does some railing on about organizing, but the story arc peters out. Chanu smells the infidelity at home and for a minute grows actually menacing (really fine acting by Satish Kaushik) but the threats are veiled, he runs out of steam, and Chanu is once again a fat sad sack, albeit a more sympathetic one. The oldest daughter runs away at night and Nazneen races after her in sari and chappals, darting across traffic, past seedy neighborhoods, down into the Tube station…where the kid gives up and they go home. WTF? The chase lasted for like, five minutes! And nothing happened!

It’s very ungrateful brownilocks of me to say this, but damn, there is such a thing as too much tastefulness. Someone shoot someone already!! All this poignancy and lyrical beauty…but at what cost when everything is at such a remove? Who are these people? The marvelous actors do their best: despite her fine-boned beauty Tannishtha Chatterjee ‘s character is so restrained, she’s flat and hard to relate to; Christopher Simpson gets to growl and prowl charismatically, but he’s just a plot device; Satish Kaushik sinks into the flabby folds of his character and ekes out every bit of comedy and pathos from his lines, but ends up upstaging the main character, Nazneen, in the process.

Here’s the catch: with immigrant stories, you want distinctly memorable characters who must also convey certain archetypal roles in the immigrant experience. Each of the trio above falls into one or the other side of this equation, but not both. The sidestory about Nazneen’s sister Hasina is relegated to a few voice-overs and repeated flashbacks of little girls in fields. The sadness and cruelty of Hasina’s story remains trapped on the page.

Oddly, the most striking aspect of the film turned out the be the cinematographer’s use of light. Colored beams stream through translucent curtains, reflect off mirrors, fracture and capture the twinkling sequins on the cheaply alluring clothes lying on Nazneen’s sewing table. Penned inside the apartment, Nazneen’s face is bathed in blues and greens, submerged and claustrophobic. As she asserts herself, we see her outdoors more frequently, widows are finally thrown open and she is awash in sunny yellows and clear wintry light.

Am I being too harsh? Probably. If you’re in NYC, SAJA is screening Brick Lane tonight at 7pm. The movie opens wide tomorrow, so go see it and come back with that tomato if you disagree. I’ll take all comers 🙂

29 thoughts on “Poignancy can have limits: BRICK LANE review”