Yes, the rumors are true (thanks former SM Guest Blogger Nayagan). Amit Singh, who I first wrote about here and who Vinod later interviewed here, has lost his bid for a congressional seat in Virginia to his primary opponent. The Reason Magazine blog provides a play-by-play of the “dirty tricks” that were used against him by fellow Republican Mark Ellmore:

We knew pretty early in the night at Amit Singh’s victory party that the candidate would lose. The first hint was nebulous: It was that Singh’s opponent Mark Ellmore, a social conservative who’d been running for two years, had blanketed the district with signs, and that there were areas (especially in Fairfax County, which contained almost half the precincts) with no Singh presence whatsoever. “They needed more visibility,” said Aaron Biterman, who’d voted for Singh then volunteered for Vern McKinley. “We needed more damn signs!” said Singh, tongue planted in cheek…

So, Singh was blunt early in the night when I asked how he felt about the vote. “That mailer with the fake quote killed us,” he said. The mailer in question was an 11th hour hit job that quoted scattered sources, including the blog of Mark Blacknell, to paint Singh as an anti-troop false Republican who refused to vote for John McCain. Singh referred to the current mission in Iraq as “operation baby-sit,” so Ellmore claimed he “insults our military professionals.” Singh was about as disappointed as half the GOP when McCain lucked into the nomination, so he was, obviously, a libertarian who would destroy the party. A picture of Singh and Ron Paul completed the attack. [Link] 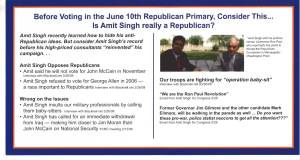 p>When Ellmore was later confronted about using scare tactics like generating fake quotes to smear Singh so close to the day of the vote, he came up with perhaps the greatest excuse I have ever heard uttered by a politician:

Amit Singh had actually seen Ellmore at the polls and chastised him for the smear; Ellmore put the onus on his 17-year old campaign manager and said he’d apologize after the election. [Link]

p>It didn’t help Amit that the turnout for the primary was pathetic:

“Turnout is, I don’t want to say anemic, but turnout is very, very, very, very light,” said Rokey Suleman, Fairfax County’s general registrar, who predicted that turnout was unlikely to exceed 5 percent by the time polls close at 7 p.m…

Amit ended his campaign by stating he wasn’t sure if he was going to run again in two years and that he was unlikely to accept the Vice Presidential spot on the ticket should McCain make an offer.