As a shameless carnivore, I’m not a likely PETA supporter. The campaigns are needlessly provocative, silly, and substance-free. This is of course, my opinion only, and a lackluster one at that. Let those kooky morally righteous beautiful people have their fun, cavorting naked in advertisements. My shoulders barely cared enough to shrug.

But this incident is really so vile, I’m speechless: 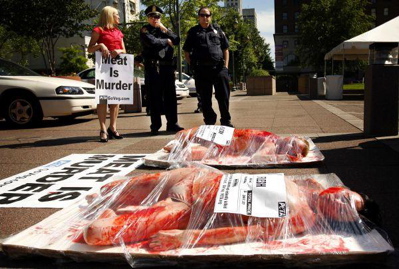 Ashley Byrne, a Washington, D.C.-based campaign coordinator with People for the Ethical Treatment of Animals (PETA), talks with Memphis police officers during a recent demonstration outside City Hall that coincided with World Vegetarian Week. When officers inquired about the well-being of intern Shawn Herbold (bottom) and volunteer Thomas Olsen, a sweat-soaked Herbold replied that she was in pain and feeling nauseated from the heat after being wrapped in cellophane for 30 minutes, and also asked how much longer she needed to stay there. Byrne let her know it wouldn’t be much longer and left her under the hot afternoon sun for 30 minutes more while debating with the officers. link

Yeah, this holier-than-thou hag wrapped two kids in plastic and left then in the blazing sun for over an hour. To demonstrate (against? for? can you tell?) World Vegetarian Week. And by the way? The East Coast is experiencing a heat wave of unbearable magnitude right now. I can only image what PETA would say if someone wrapped cute kittens and puppies in plastic and let ‘em bake in 100 degree heat. Hypocrite, much?

Larger version of this image (warning: close up is disturbing) and more on PETA’s activities in India, after the jump. 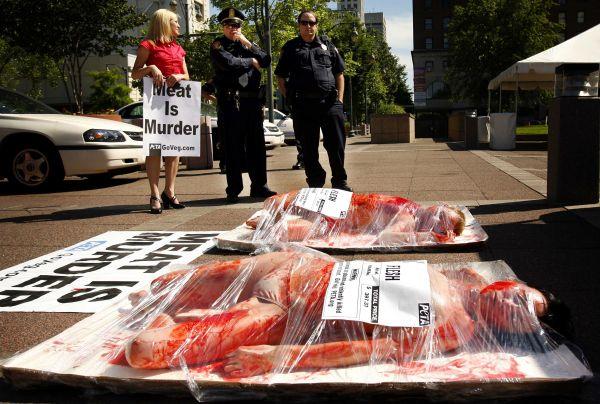 Respect for animals is an intrinsic part of most South Asian cultures, whether veg/non-veg or mono/polytheistic. We’ve talked about vegetarianism and the appropriation of Hindu iconography in previous posts, but what are we to make of PETA’s growing influence in India? While South Asian food and a pantheon of deities have been imported to the West (vegans and vegetarians flock to Indian restaurants, images of Ganesh appear on flip-flops and sofa cushions, etc.) do we really need Western PETA-style philosophies exported back East?

PETA has blog on the activities of its Indian affiliates, The PETA Files. Below, scenes from an anti-leather demonstration in Bangalore. Frankly, I’m about as confused as the cops. 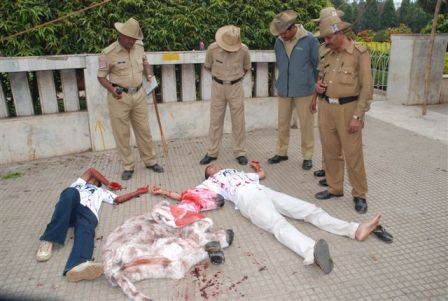 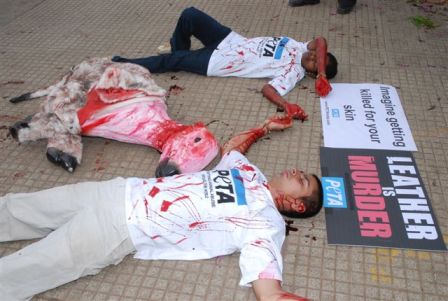 Photo of Interns by Mike Brown / The Commercial Appeal