A cute story, written up in the San Francisco weekly “Beyond Chron,” got sent my way today by my cousin. The story features my aunt (SM commenter “Yo Dad’s” sister). Here is how the story, written by a Barack Obama precinct captain, begins: 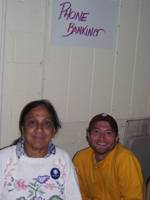 Barack Obama is no longer the icon of this presidential election. He has been quietly replaced by a widowed Indian immigrant mother from Fleetwood, Pennsylvania â€¦ at least for me. This is how that happened…

A couple of weeks before the Pennsylvania primary, one of Mrs. Trivedi’s doctor sons (the one in D.C.) wanted to travel back home to help with the election. She decided to help too. And one day, about a week before the election she walked into the office without me noticing.

I was then startled by a quiet voice.

I smiled, introduced myself, and then showed her how to use the phone and she went at it. She completed several dozen calls and dutifully checked the appropriate boxes on the tracking sheets and then went home. [Link]

My first ever job (just before high school) was as a telemarketer. Despite the fact that the cause I was telemarketing for was a good one, the rejection was constant and demoralizing. At the end of each day I felt worthless. My boss just said, “stick to the script, it’s proven to work.” No, not in all cases. My aunt had it much worse as she read the Obama script:

She was back the next day, but the campaign had changed to a longer “persuasion” script, and by the time Mrs. Trivedi got through it, a whole lot of people had already hung up.

It seemed that way to me too, and it bothered me. I knew the reaction of the people she was calling. While it wasn’t really racism, it just seemed a little too much like it. [Link]

So how did things turn out? Well, the script was flipped. This time, instead of summarizing, I am going to ask you all to click on the story and read what happened for yourselves.

25 thoughts on “Phone-banking with an accent”