Today, June 10th, is Governor Jindal of Luisiana’s 37th birthday. We’re squeaking in just before the witching hour, but I just noticed it on The Page and wanted to acknowledge the Youngest Governor’s Ever’s special day.

Louisianaâ€™s leader spends part of his 37th birthday on Fox News, promoting McCainâ€™s economic plan and the Bayou Stateâ€™s turnaround. Seeks to bat away VP questions, but declines to give a â€œShermanesqueâ€ response like Strickland, saying it would be â€œpresumptuousâ€ to reject a job he hasnâ€™t been offered. link 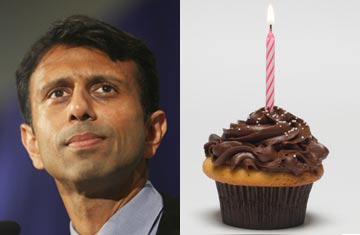 We’ve discussed Bobby Jindal at length on this blog, and I know each mutineer has wildly varying yet equally complicated thoughts on the man. For now, I’d like to highlight the issue of his name:

Jindal was born in Baton Rouge, the first child of Indian immigrants. Bobby is a self-ascribed nickname. Jindal says he adopted it when he was 4 years old and a fan of the puckish youngest boy on “The Brady Bunch” TV show. His legal name remains Piyush, but even his family, he said, calls him Bobby. link

The above quote is from a great article in The Times Picayune, “Name game can have racial tinge”. Right now, much is made of the right-wing attack machine’s use of Barack Obama’s middle name, Hussein, to alienate those blue-collar, hard-working Americans from this dark-skinned “other”. But what of the fact that Dems are using Bobby’s Indian name in referring to him? Is it equally innocuous/vile? I can’t say I support the Governor, so would it be disparaging of me to use his birth name? Who knows what truly lies within the heart of a man…but can we, who share some background with him, speculate? I’ve just got questions right now, and hope to try to answer them in another post, some other time. But until then, please check out the article and let us know what you think.